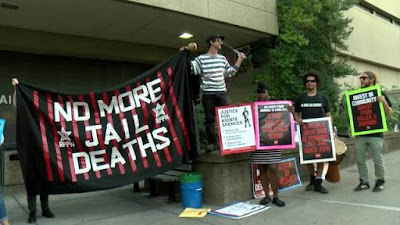 ROANOKE, Va. - Protesters took to the streets Tuesday evening to bring awareness to another death in the Roanoke city jail this month.

The Sheriff's Office confirmed that makes six deaths in the last two years. According to federal statistics, that's more than three times the national average.

Shortly after 6 p.m., several people marched to the sound of a loudspeaker and a drum, showing support for the parents of the six people who have died in the jail in the past two years.

"Nobody should have to explain to their... 3-year-old that their brother's not coming back," Natasha Harper said, whose son Clifton died in the jail in 2015.

His death was ruled a suicide, but she says the officer's response at the time left her with questions.

"An officer did report that during check count, he had seen him fiddling with his sheet, but it wasn't anything alarming, and I said sheet, why does he have a sheet? He was on suicide watch. And then after that everything was sorry, I can't answer that," Harper said.

"How does somebody hang themselves and nobody see it? That's my question. At first I was numb about this, but now I'm angry," Jones said.

That anger is what protest organizer Jason Lambert said made him and other supporters want to hold the jail accountable.

"They're technically in custody of the state, so that means the state is responsible for everybody who's in here, and when six people die, that's six deaths that they are responsible for," Lambert said.

For parents like Jones and Harper, that responsibility lies in providing them with information, like security camera footage. Jones says, that's something he's asked for without a response, and now he's tired of waiting.

"There needs to be more awareness of what's going on in here. Something's wrong in here, and it needs to be investigated," Jones said.

WSLS reached out to the sheriff's department and it issued a brief statement, reading "The Roanoke City Sheriff's Office is aware of the rally being held by the Roanoke Peoples' Power Network this evening regarding inmate deaths. It is the constitutional right of an individual to peacefully protest any cause they feel necessary. The Roanoke City Jail continues to be sensitive to the family members and friends of the individuals impacted by these events."
INTERNET SOURCE: https://www.wsls.com/news/virginia/roanoke/protests-in-roanoke-after-sixth-inmate-dies-in-city-jail-in-two-years