TWENTY YEARS LATER…JUSTICE FOR THE BUSBY FAMILY (MURDERED BY HANK SKINNER ON DECEMBER 31, 1993)

20 years ago on this day (December 31, 1993), Twila Busby and her two adult sons were murdered in Texas. Unit 1012 knows the grief of those who are the loved ones of Twila Busby and we support them. Please go to this blog post to learn more. 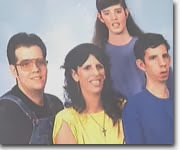 
God of all gifts, we thank you for the many ways You have blessed us this day. As a God of compassion, you know the holes that are left in our heart caused by the senseless death of a loved one. While the world celebrates around us we long for a Christmas past where we could have our loved one with us again. Only you can understand the depths of our sadness, for You experienced the death of Your own Son on the Cross to save our souls. Lord, for all of us who suffer through tragedy, we pray that you heal us of the loss of our loved one who departed, and dry the tears of sorrow that weighs down our hearts.

May Your hand impart peace and healing to the downtrodden and bring justice to a land who needs Your counsel and guidance. We ask for Your special dispensation for families victimized by heinous crimes and for Your wisdom to reign in the courtrooms- but most of all, we want in this season for Your will and way to penetrate the hearts of the unbelieving who can never have the inner peace they long for until You enter their hearts.

From the Unit 1012 to your family, may God bless and protect this Christmas season and open up more doors for legal and social justice to prevail. Amen

Unit 1012 wishes a Merry 2013 Christmas to Jon Benet Ramsey and her loved ones. The six-year-old beauty was murdered on Christmas Day 1996. Her murder has been left unsolved. Nevertheless, the comrades of Unit 1012 will honor her and she will be one of The 82 murdered children of Unit 1012, where we will not forget her.


Units 1012 DO NOT support a wrongful conviction, so in her case, we will leave it to God who will judge the guilty person who murdered her. We will remember how she live and not how she died.

JonBenét Patricia Ramsey (August 6, 1990 – December 25, 1996) was an American child beauty pageant queen who was murdered in her home in Boulder, Colorado, in 1996. The six-year-old's body was found in the basement of the family home about eight hours after she was reported missing during a police search of her home. She had been struck on the head and strangled. The case remains unsolved, even after several grand jury hearings, and continues to generate public and media interest.

Colorado law enforcement agencies initially suspected JonBenét's parents and her brother. However, the family was partially exonerated in 2003 when DNA taken from the victim's clothes suggested they were not involved. Her parents would not be completely cleared until July 2008. In February 2009, the Boulder Police Department took the case back from the district attorney to reopen the investigation.

Media coverage of the case has often focused on JonBenét's participation in child beauty pageants, her parents' affluence and the unusual evidence in the case. Reports have also questioned the police's overall handling of the case. Several defamation suits have been filed against several media organizations by Ramsey family members and their friends over reporting of the murder.

On October 25, 2013, previously sealed court documents were released, showing that a Colorado grand jury had voted in 1999 to indict John and Patricia Ramsey in the murder of 6-year-old JonBenet Ramsey on charges of child abuse resulting in death and being accessories to a crime. However, then-District Attorney Alex Hunter decided not to sign the indictment, saying the evidence was insufficient.