President Duterte Warns George Soros ‘There Is A Bounty On Your Head’
May 6, 2017 Baxter Dmitry

George Soros cancelled a proposed “humanitarian visit” to the Philippines after President Duterte warned him “there is a bounty on your head in these islands.“

Soros is a strong candidate for south-east Asia’s most unpopular man after being widely blamed for crashing the Thai and Malaysian economies in 1997 and sparking the Asian financial crisis through ruthless currency speculation.

President Duterte hasn’t forgiven the globalist financier. The man dubbed “Duterte Harry” by the Filipino people is also wise to the Soros agenda of divide and conquer and his brand of media manipulation.

The Philippine House of Representatives approved a proposal last week to reinstate the death penalty, and the president took the opportunity to fire a warning at George Soros: “There is a special place in hell for you, idiot. Set one foot in this country and my duty is to make you go straight there.” 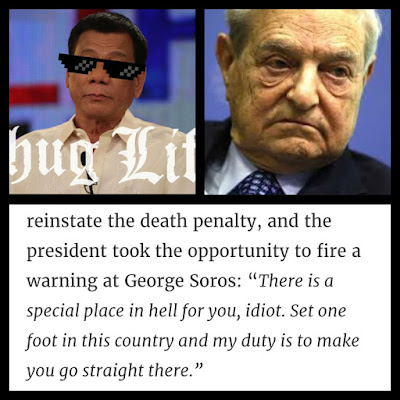 Duterte and Soros have been locked in a war of words for years, with the Philippine president accusing Soros of destabilizing Asian democracies and financing editorial hit-pieces against him and his country in media outlets around the world.

Critics around the world, including in the U.S. and in Soros’ homeland of Hungary, say the liberal billionaire disguises himself as a “humanitarian” while causing chaos and manipulating the political landscape.

Duterte homed in on Human Rights Watch, which he said was attacking him to justify a $100 million, 10-year grant globalist George Soros promised it six years ago.

“This Human Rights Watch of New York, that belongs to Soros. Soros was the financier. That’s him. It’s his grant,” he said.

“They have funding money. They will really attack to justify. They chose me… they’re pounding on me. That is fine, editorials every day. I can swallow that.“

Corporate media hit pieces may have influenced international opinion of Duterte, but in his own country he is revered. He boasts a massive 83% popular approval rating across the land.

President Duterte rode into power campaigning on a ticket of major change, but unlike Western politicians who pay lip service to change before letting down their supporters, the Philippines president has delivered on his promises – in spades.

During the election campaign Duterte urged the people to kill him if he failed to resolve crime and corruption in the country during the first six months of his term.

Over one year into his term and he has delivered on his promises. He’s now famous for more than calling President Obama a “son of a whore” at a regional summit in Laos last year. Much to the Soros-influenced international community’s outrage, Duterte Harry is shooting from the hip, and cleaning up his country.

How does Duterte get away with taking on the rich and the powerful, installing law and order, and going against the globalist agenda of chaos and destruction?

The corporate media has no power over him. George Soros and corrupt oligarchs cannot use the mainstream media to destroy him because the people don’t trust what the media says anymore.

The people trust Duterte because unlike generations of politicians who came before him, he actually does what he says. His anti-globalist policies enrage the powers that be in the West, who have waged war against him through their propaganda channels in the media.

But his policies have improved the lives of citizens of the Philippines, who were suffering in a chaotic, lawless land under corrupt regimes for decades.

Whose judgement should we trust – the global cabal, or his own people?
INTERNET SOURCE: http://yournewswire.com/duterte-soros-bounty/
Posted by SAINT MICHAEL 2012 at 9:00 PM No comments: