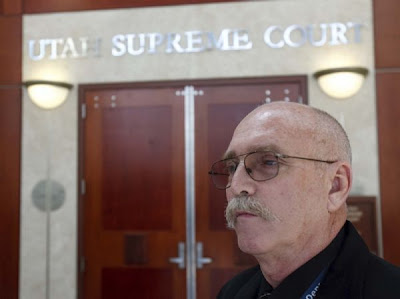 Craig Watson, cousin of Ronnie Lee Gardner victim Melvyn J. Otterstrom, is photographed outside the courtroom at the Utah Supreme Court in Salt Lake City on Thursday, June 3, 2010. Watson said of the scheduled execution, "The 18th will be a day of closure." (Trent Nelson/The Salt Lake Tribune)

Craig Watson, cousin of Ronnie Lee Gardner victim Melvyn J. Otterstrom, is photographed outside the courtroom at the Utah Supreme Court in Salt Lake City on Thursday, June 3, 2010. Watson said of the scheduled execution, "The 18th will be a day of closure." (Trent Nelson/The Salt Lake Tribune)

A lawyer for Ronnie Lee Gardner asked the state's highest court on Thursday to throw out his death sentence and halt his execution.

With just two weeks left before Gardner is slated to die, Andrew Parnes argued to the Utah Supreme Court that his client might have gotten a life sentence if adequate mitigating evidence had been presented to a trial jury years ago.

Parnes is asking the Supreme Court to either impose a life sentence without parole or order a new sentencing hearing.

Assistant Attorney General Thomas Brunker responded that Gardner has no constitutional right to bring that claim at this late date. He also said the claim has no merit, pointing out that Gardner presented evidence of his alleged organic brain damage and dysfunctional childhood as part of an unsuccessful federal appeal.

The justices asked Parnes why he thought presenting that same evidence to a jury would result in a different outcome, given that the federal court had rejected that claim.

"We believe there is a high probability that at least one juror could weigh this evidence differently," Parnes said.

The justices took the arguments under consideration and will announce their decision at a later date.

The effort to spare Gardner's life is based on two arguments, that his trial lawyers were ineffective because they failed to present mitigating evidence that could have led to a life sentence and that executing him after 25 years of litigation amounts to unconstitutional cruel and unusual punishment.

Gardner, 49, is sentenced to die for killing attorney Michael Burdell during an April 2, 1985, escape attempt from a courthouse in Salt Lake City. After a woman slipped him a gun, Gardner wounded bailiff Nick Kirk and fatally shot Burdell before being captured on the courthouse lawn.

Gardner had been brought to the courthouse that day for a hearing in the 1984 slaying of Melvyn Otterstrom at a Salt Lake City bar. He pleaded guilty in that case and is serving a 5-year-to-life sentence for that murder.

After the hearing, Otterstrom's cousin, Craig Watson, said he wants the execution to go through as scheduled.

"It's about time justice is served," he said.

Third District Judge Robin Reese signed an execution warrant April 23 at the request of the Attorney General's Office, which said Gardner had run out of appeals. Gardner is scheduled to be executed June 18 by firing squad, a method he chose over lethal injection.

The arguments Thursday were an appeal of the signing of the execution warrant. Gardner has a second case before the Supreme Court, which is an appeal of Reese's denial of his request for a new sentencing. That case, which asserts the same arguments on mitigating evidence and cruel and unusual punishment, is being briefed; no hearing has been set.

Gardner and his lawyers will make another last-ditch to save his life at a commutation hearing next week. The condemned man will ask the Board of Pardons and Parole to reduce his sentence to life without the possibility of parole.