"This lack of finality devastates the criminal justice system. It diminishes the deterrent effect of state criminal laws, saps state prosecutorial resources and continually reopens the wounds of victims and survivors."
- In a 1991 op-ed in The New York Times, William Barr argued that death row inmates' ability to challenge their sentences should be limited to avoid cases dragging on for years


The 85th Attorney General of the United States, William Barr received the Rayner Goddard Act of Courage Award from the comrades of Unit 1012. He favors the use of the death penalty and is working to retain it in the country.

We have watched him fight for justice and the death penalty in Nebraska and want him to know that he has encouraged victims' families and leaders worldwide. We honor and respect him. We hope that more judges and government officials will follow their courageous character.

We, the comrades of Unit 1012: The VFFDP, send our utmost thanks and congratulation to the Attorney General. He is our hero in showing his care and love for the murdered victims’ families. We wish that more leaders can take his leadership example and follow it. We will pray for him all the way.

On July 25, 2019, Attorney General William Barr announced that the federal government would resume the use of capital punishment. Five convicted death row inmates are currently scheduled to be executed in December 2019 and January 2020.

Attorney General William Barr on Thursday issued a directive paving the way for the federal government to resume the use of the death penalty for the first time in nearly two decades, the Department of Justice announced.

According to the agency, Barr ordered the Federal Bureau of Prisons (BOP) to adopt a proposed addendum to the Federal Execution Protocol to allow for capital punishment to resume. The DOJ provided descriptions of five individuals it seeks to have executed in the months of December and January: Daniel Lewis Lee, a white supremacist, who murdered three people, including an eight-year-old girl; Lezmond Mitchell, who stabbed to death a 63-year-old grandmother and slit the throat of her nine-year-old granddaughter; Wesley Ira Purkey, who raped and killed a 16-year-old girl; Alfred Bourgeoism who molested, and beat to death his two-and-a-half-year-old daughter; Dustin Lee Honken, who shot dead five people.

“Congress has expressly authorized the death penalty through legislation adopted by the people’s representatives in both houses of Congress and signed by the President,” Attorney General William Barr said in a statement.  “Under Administrations of both parties, the Department of Justice has sought the death penalty against the worst criminals, including these five murderers, each of whom was convicted by a jury of his peers after a full and fair proceeding.  The Justice Department upholds the rule of law—and we owe it to the victims and their families to carry forward the sentence imposed by our justice system.”


Additional executions will be announced at a later date, the DOJ stated.

President Barack Obama ordered a review of the death penalty in 2014 after a botched state execution in Oklahoma. The findings of the review are unclear and it is unknown whether the review will impact the way in which future executions will be carried out.

Attorney General William Barr should be applauded for announcing Thursday that the federal government will resume executing convicted murderers on death row for the first time since 2003, beginning with five vicious killers in December and January.

“Congress has expressly authorized the death penalty through legislation adopted by the people’s representatives in both houses of Congress and signed by the President,” Barr said in a statement. “We owe it to the victims and their families to carry forward the sentence imposed by our justice system.”

While the legislation Barr refers to permits a punishment of death, it doesn’t compel it. We rely on the Justice Department to seek the death penalty only for the worst of the worst murderers – those who most clearly deserve to die. And we rely on juries in each individual murder case to act as the moral filter and conscience of the community to decide if the death penalty is warranted.

Reviewing the despicable crimes of the five men scheduled to be executed, we can safely say that the Justice Department has exercised its prerogative wisely.

The federal government has only imposed the death penalty on three murderers since 1988, when Congress reinstated capital punishment at the federal level.

Federal officials executed the most well-known of the three, Timothy McVeigh, in 2001 for blowing up a federal building in Oklahoma City in 1995. The blast killed 168 people including children at a child care center. McVeigh dismissed their murders as “collateral damage,” stoking our collective outrage.

“In a well-governed state, citizens, like limbs on a single body, should feel and resent one another’s injuries,” Solon, the great Greek lawgiver, declared 2,500 years ago.

Yet so-called “abolitionists” – opponents of the death penalty in every case – always reflexively plead for the life of murderers, however heinous their crimes.

Inside maximum security prisons, those sentenced to life without parole form friendships, play ball, eat ice cream and watch movies – simple pleasures their victims will never enjoy. It may not be a great life – but it’s a life they greatly prefer to the alternative, as their low suicide rate demonstrates.

Over several decades, I have spent thousands of hours inside maximum security prisons and on death rows as part of my academic research on the death penalty. I have interviewed convicted murderers to identify the worst of the worst among them and thus separate those killers who deserve to die from those who don’t.

During my visits, the daily lives of lifers in prison – spared the death they arguably deserved – appalled me.

Inside maximum security prisons, those sentenced to life without parole form friendships, play ball, eat ice cream and watch movies – simple pleasures their victims will never enjoy. It may not be a great life – but it’s a life they greatly prefer to the alternative, as their low suicide rate demonstrates.

Typically, after notorious murders many pro-abolitionist news organizations – such as NPR, the BBC, The New York Times and The Washington Post – cast the death penalty in a thoroughly negative light, as an arbitrary, racist and barbaric relic that has no place in modern society.

Yet most people – whatever their general political persuasion, however sensitive they are to problems with class or race bias in the criminal justice system – know intuitively and feel certain morally that some vicious murderers do deserve to die. As a society, we have an obligation to kill them.

Death penalty opponents have long distorted and largely diminished public support by asking questions such as: “Are you in favor of the death penalty for someone convicted of murder?” Depending upon the year, a small majority or at least a plurality of Americans still say they favor capital punishment for all murderers.

Instead of asking the vague generic question of whether we should respond with the death penalty for murder, suppose pollsters asked more specific questions about the worst killers among us, such as these:

Should Dylann Roof – the white supremacist who entered the Emanuel African Methodist Episcopal Church in Charleston, S.C., and killed nine black congregants who were peacefully worshipping – live or die? He received a death sentence for his conviction in federal court.

Should Joshua Komisarjevski – who sexually abused an 11-year-old girl, posted cell phone photos of her and then tied her to her bed, poured gasoline over her and burned her alive – live or die? He was convicted of the 2007 triple murders of Jennifer Hawke-Petit and her two daughters – 17-year-old Hayley and 11-year-old Mikaela. A jury sentenced him to death, but Connecticut abolished its death penalty and he now is serving a life prison sentence without parole.

Should Dzhokhar Tsarnaev – who placed a bomb next to a child at the finish line of the Boston Marathon, coldly calculated to kill and maim as many people as possible – live or die? A jury sentenced him to death for the 2013 bombing that killed three people and injured several hundred.

These vicious killers violated our sanctuaries and randomly destroyed innocent victims in what should be our most safe and sacred spaces.

Ask the public the question concretely and the ethical answer emerges clearly: A vast majority – including those who publicly oppose the death penalty because they don’t trust our criminal justice system to get it right – intuitively know that morally these killers deserve to die.

We who call for proportional punishment justify the death penalty not because it can deter other vicious killers; not because once we’ve captured these murderers we have no other way to keep us safe; and not because we can’t imagine how we could rehabilitate them. Those of us who believe in retributive justice find these justifications ultimately irrelevant.

Today we tolerate too little and hate too much. But unfortunately, there is a time to hate, and there are people whom we should detest. They deserve to die and we should kill them – as soon as legally possible.

Robert Blecker, a criminal law professor at New York Law School, is the author of “The Death of Punishment: Searching for Justice Among the Worst of the Worst.”
INTERNET SOURCE: https://www.foxnews.com/opinion/robert-blecker-ag-barr-is-right-to-resume-death-penalty-for-vicious-killers 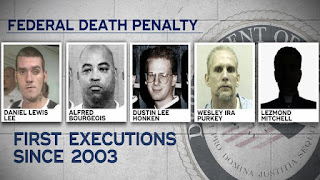 https://www.lawenforcementtoday.com/return-to-law-and-order-america-brings-back-the-federal-death-penalty/
Posted by SAINT MICHAEL 2012 at 6:00 PM No comments: