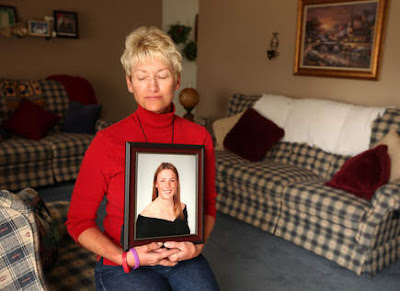 Cindy McNamara is upset at Governor Pat Quinn for abolishing the death penalty in Illinois. McNamara's daughter, Eastern Illinois University student Shannon McNamara, was killed by Anthony Mertz in 2001. Mertz, currently on Death Row, is now spared by the death penalty ban. She holds a photo of her daughter on Friday, March 18, 2011. | Richard A. Chapman~Sun-Times

SPRINGFIELD — Cindy McNamara called Gov. Quinn’s office five times since January, desperately seeking to talk to him before he decided whether to end the death penalty and clear Death Row.

The best the Rolling Meadows woman got was a call from an aide.

And now, this mother whose only daughter, Shannon, was murdered by the first killer put on Death Row since George Ryan left office, has nothing but harsh words for Illinois’ current governor, whom she angrily derides as “a weasel.”

“He totally dismissed me and the other families like we didn’t count. Our say was not worth the time and the respect that he could give us to sit down and talk to us,” she said. “He’s the governor. He’s the head of the state. I’m just a little person. But I still pay my taxes, and he just took Shannon’s death like it was a stub on the toe.”

Mertz was convicted of the June 2001 murder of Shannon McNamara, a 21-year-old Eastern Illinois University student a semester away from graduating and former high school track athlete.

A jury determined Mertz, an ex-Marine and apparent admirer of Adolf Hitler and Oklahoma City bomber Timothy McVeigh, broke in to her apartment while she was asleep and attacked her, raping, beating, strangling and stabbing the young woman. Mertz positioned his mutilated victim in such a way so her roommate would discover the body when she returned to the apartment.

With his action on the death penalty, Quinn justified reducing the sentences of Mertz and other condemned killers to life in prison without parole, saying that once he’d decided to abolish the death penalty, it should be done for all.

Quinn told reporters that he talked to advocates on either end of the death penalty spectrum while weighing the issue, but the governor specifically acknowledged he did not speak to any family members whose loved ones were killed by the 15 on death row.

“I think I listened to many, many people on both sides of this issue. I think it is probably impossible for me to talk to everyone,” Quinn said.

After Quinn made that statement a week and a half ago, his office Friday clarified the governor’s assertion that he had not met with any family members who had loved ones murdered by someone on Death Row.

Dugan was sentenced to life in prison for killing Donna Schnorr, but Dugan’s actual death sentence came in 2009 for the 1983 murder of 10-year-old Jeanine Nicarico, of Naperville.

Before Quinn’s action on March 9, Cindy McNamara left with her husband on a trip to Cancun to celebrate their 35th wedding anniversary. She thought she still stood a chance to speak with Quinn when she returned based on his aide’s assurances.

But two days into their Mexican getaway, a friend got an international call through to McNamara and informed her of Quinn’s decision.

“She said, ‘Cindy, he signed it.’ I said, ‘You know what, Sharon? I pretty much thought he would.’ But I was praying and hoping it wouldn’t go further than that, that he’d give us, the victims’ families, a chance before he commuted all those guys. Then the next sentence I heard was, ‘He commuted the death sentences,’ and my heart just dropped.”

The news that Mertz wouldn’t be put to death, McNamara said, was “pretty close” to as jolting as first getting word her daughter was dead.

“Is he a coward? Did he not want to face us?” she said of the governor, who as a candidate last fall expressed support for the death penalty though he vowed to keep the moratorium on executions in place.

The early-March phone call McNamara wound up getting from the Quinn aide — a woman whose name she now can’t remember but who confided that she too had a daughter named Shannon — came after McNamara sought help from state Sen. Matt Murphy (R-Palatine) in reaching the governor.

McNamara said she turned to Murphy, her state senator, after five previous phone messages to Quinn’s office were left unanswered since she wrote a letter to the governor in early January. (The governor’s office released a copy of that letter to the Chicago Sun-Times along with correspondence from others two weeks before the governor’s decision.)

“There are 15 murderers on Death Row. If you’re gonna do this, calling on the families of their victims isn’t that onerous of a task,” Murphy said. “She deserved a call back at a minimum from the chief of staff and preferably the governor himself to hear her out. Unfortunately, she didn’t get that.”

One thing McNamara said she remembers about the discussion with the Quinn aide was telling her the dates she and her husband would be gone and that she still hoped for an audience when they returned to the northwest suburbs this past week.

“It’s so strange that it was a Wednesday when we left, and on that day he signed it,” she said. “I think he felt like, ‘All right, that’s one person off my back for a week.’”

But McNamara’s strong feelings for the death penalty reached the governor’s office and Quinn himself, Thompson said.

“The governor did read Cindy McNamara’s letter, and she spoke at length with a top legislative aide in the governor’s office,” the Quinn spokeswoman said. “During his deliberation on this historic legislation, Gov. Quinn carefully considered such letters, conversations and all those who reached out to his office as he made a decision that was ultimately based on a system that is flawed and that we cannot rely on when lives are at stake.”

With time to soak in the new reality involving Shannon’s killer, Cindy McNamara said she now has a whole new set of fears despite Quinn’s promise to keep the prison door shut forever on Mertz and others on Death Row.

“I’m afraid he’s gonna get out. People say, ‘He’ll never get out. He’s not available for parole.’ But I just don’t trust the system anymore,” she said.
“Shannon is in a good place. I don’t have to worry about her anymore. But it’s all the other young women. If that maniac, psychopath is let out, he’ll commit murder again. I know he will. Just look at his mugshot. He has that creepy smile, that smirk. And that’s exactly what he had when he was looking at young women coming into the court,” she said.

McNamara said her enmity for Quinn now runs so deeply that if he seeks another term in 2014, she said she’d “absolutely” appear in an opponent’s campaign commercial, if asked, to explain to voters what the governor did to her family and how he went back on his pledge as a candidate to support the death penalty.

“I just want the people of Illinois to know what he really stands for,” she said. “He just blatantly lied to us.”