50 years ago… This Unrepentant Mass Murderer was hung.

On this day 31 May 1962, Adolf Eichmann was hanged shortly before midnight on May 31, 1962, at a prison in Ramla, Israel. His executioner was Shalom Nagar, an Israeli Jew of Yemenite origin. Eichmann allegedly refused a last meal, preferring instead a bottle of Carmel, a dry red Israeli wine, consuming about half the bottle. He also refused to don the traditional black hood for his execution.

Shortly after the execution, Eichmann's body was cremated in a specially designed furnace, and a stretcher on tracks was used to place the body into it. The next morning, June 1, his ashes were scattered at sea over the Mediterranean, beyond the territorial waters of Israel by an Israeli Navy patrol boat. This was to ensure that there could be no future memorial and that no country would serve as his final resting place.

Who is Adolf Eichmann?

Adolf Eichmann (March 19, 1906 – May 31, 1962) was a German Nazi SS-Obersturmbannführer (Lieutenant Colonel) and one of the major organizers of the Holocaust. Because of his organizational talents and ideological reliability, Eichmann was charged by Obergruppenführer (General) Reinhard Heydrich with the task of facilitating and managing the logistics of mass deportation of Jews to ghettos and extermination camps in German-occupied Eastern Europe. After the war, he fled to Argentina using a fraudulently obtained laissez-passer issued by the International Red Cross. He lived in Argentina under a false identity, working for Mercedes-Benz until 1960. He was captured by Mossad operatives in Argentina and taken to Israel to face trial in an Israeli court on 15 criminal charges, including crimes against humanity and war crimes. He was found guilty and executed by hanging in 1962. He is the only person to have been executed in Israel on conviction by a civilian court. 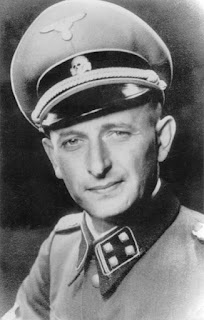 Moshe Landau (Hebrew: משה לנדוי‎, 29 April 1912 – 1 May 2011) was an Israeli jurist. He was the fifth President of the Supreme Court of Israel. Landau was born in Danzig, Germany (modern Gdańsk, Poland) to Dr. Isaac Landau and Betty née Eisenstädt. His father was a leading member of the Jewish Community of Danzig In 1930 he finished high school in the Free City of Danzig and in 1933 he graduated cum laude from the University of London school of law. That year, he immigrated to the British Mandate of Palestine. In 1937 he was admitted to the Bar of Palestine. In 1940 he was made judge in the Magistrate's Court of Haifa and was appointed to the District Court in 1948. Member of the International Court of Justice. Chairman of the World Zionist Congress tribunal. Chairman of the advisory Commissions on reforming the Israeli Land Law, criminal procedure and administrative tribunals. Chairman of the Commission for recognition of righteous among the nations in Yad Vashem. From 1956 to 1962 and from 1965 to 1966 he served as Chairman of the board of directors of the Technion.

When the Eichmann trial opened on April 11 1961 under the close scrutiny of the world's media, Landau read out a 15-count indictment which included charges of "causing the killing of millions of Jews", "torture", and placing "many millions of Jews in living conditions that were calculated to bring about their physical destruction". He and his fellow judges took pains to spell out the basis of the court's claim to jurisdiction. The state of Israel, they argued, represented all Jews: "To argue that there is no connection is like cutting away a tree root and branch and saying to its trunk: I have not hurt you."

Landau also dealt deftly with Eichmann's claim that he had simply been following orders and had been but a small cog in the Nazi machine. "A soldier, too, must have a conscience," Landau declared. 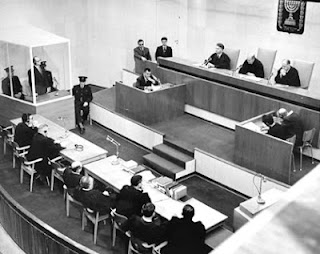 On May 31 1962, Israeli President Yitzhak Ben-Zvi turned down Adolf Eichmann's petition for mercy. On the telegram that Eichmann's wife, Vera, sent in support of the clemency, Ben-Zvi added in his handwriting a passage from the First Book of Samuel: "As your sword bereaved women, so will your mother be bereaved among women." (1 Samuel 15:33, Samuel's words to Agag, king of the Amalekites). Eichmann was hanged a few minutes before midnight on May 31, 1962, at a prison in Ramla, Israel. - Yitzhak Ben-Zvi (Hebrew: יצחק בן צבי‎, born 24 November 1884, died 23 April 1963) was a historian, Labor Zionist leader, the second and longest-serving President of Israel.

Remember Ronald Reagan’s speech: I warned that there should be no place on Earth where terrorists can rest and train and practice their deadly skills. I meant it. I said that we would act with others, if possible, and alone if necessary to ensure that terrorists have no sanctuary anywhere. Tonight, we have. (Address to the Nation on the United States Air Strike Against Libya April 14, 1986) 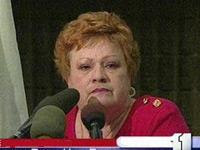 QUOTE 1: During a press conference just after 10 p.m., Dawn Marie Garvin's mother, Betty, said Oken "has been brought to justice." "It has been a long 17-year rollercoaster ride. My family has been put through hell in the past 17 years," Betty Romano said. "This past two weeks has been the worst two weeks since we lost Dawn." She thanked God, family members, the state attorney general and the U.S. Supreme Court.

She also thanked the governor for his unwavering support. "From the bottom of my heart, I want to thank that man [Ehrlich] very much because he stuck to his word. He kept his word. He didn't wimp out at the last minute. He's a very strong man and I don't have any problems supporting him in the future, ever," Mrs. Romano said.

QUOTE 2: At one point during the execution, Oken's toe twitched a "mile a minute," Mrs. Romano said. She said she saw little else, commenting that her view of the inmate was his toes and his stomach. "He was aware until he got that first shot," she said. "I could tell by the reaction of his body." Garvin's brother, Fred A. Romano, said justice has been served. He said the families of the victims are elated, and it's time to move on.

Asked whether Oken's death would bring any healing to his family, Fred Romano said: "It started at 9:18. The burden's been lifted. Oken is dead."

AUTHOR: Family members of Dawn Marie Garvin who was murdered by Steven Oken on 1 November 1987. He was executed by the state of Maryland on 17 June 2004. 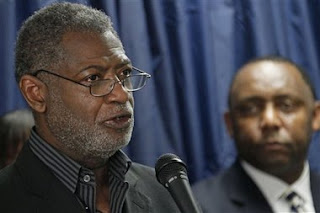 QUOTE: “I don’t think we will ever have complete closure because a void will always exist in our hearts,” said Roy Curry, who did not watch the execution. “At least we will have some consolation in knowing that the person who committed this cowardly and senseless act is finally gone.”

AUTHOR: Roy Curry whose brother, Everett Curry together with Eddie Brooks were murdered by Edwin Hart Turner on 12 December 1995. Edwin Hart Turner was executed by lethal injection in the State of Mississippi on Wednesday 8 February 2012.

Response to Connecticut's Repeal of the death penalty.

JURIST Guest Columnist Ben Jones, Executive Director for the Connecticut Network to Abolish the Death Penalty, says that Connecticut's repeal of the death penalty is one of the first of a trend of states moving away from capital punishment ...

Rebuttal: I know there are murder victims’ families who are against the death penalty, I accept their opinions but rather than abolish it, fix the system. Just for argument sake, there could be also another 179 murdered victims’ families who want to keep capital punishment. Senator John Kissel and some Politicians are trying to speed up the appeal system. Are you not going to forget William Petit and his family members?

“In addition to this systemic bias, Georgia's execution last September of Troy Davis — an African-American whose guilt was in doubt — served as a potent symbol of the role race continues play in America's death penalty. Following Davis' execution, NAACP President Benjamin Jealous made repeal of the death penalty a priority and focused on Connecticut in 2012. Jealous joined Connecticut NAACP leaders in a series of rallies, marches, and press conferences calling for repeal of the state's death penalty. Their message was clear: the only way to eliminate bias in capital punishment is to repeal it. Enough is enough.”

Rebuttal: “A potent symbol of the role race continues play in America's death penalty.” I did not see them mentioning about Lawrence Brewer, a racist white supremacy who was executed for murdering an African-American, James Byrd. Those activists did not wear a T-shirt saying, “I AM LAWRENCE BREWER.”

There are many cases of White-Americans being executed for murdering African Americans. I can name two here:

Lisa Yvonne Alexander Crider was murdered by Brandon Hedrick on 10 May 1997. He was executed by the electric chair in Virginia on 20 July 2006.

The only way to eliminate bias is to destroy racial discrimination in the system, if the system is racist and people go to jail. I did not hear them say abolish prisons too.

“Finally, members of Connecticut's law enforcement community grew increasingly frustrated with the state's death penalty. Nationally, a majority of police chiefs recognize that there is no evidence that the death penalty deters crime — a point backed up by a recent study conducted by the National Academies.”

“In Connecticut, the General Assembly's non-partisan Office of Fiscal Analysis estimated that the state eventually would save $5 million a year by ending the death penalty.”

Rebuttal: U.S. states that repeal death penalty laws do not see a significant savings in trial costs. In states where the death penalty is the maximum punishment, a larger number of defendants are willing to plead guilty and receive a life sentence. The greater cost of trials where the prosecution does seek the death penalty is offset, at least in part, by the savings from avoiding trial altogether in cases where the defendant pleads guilty.
http://wwwiloveccp-thepunisher2008.blogspot.com.au/2011/05/is-death-penalty-expensive-no-it-isnt.html

“Connecticut's experiment with capital punishment has come to an end. Expect more states to follow suit. With each passing year, promises that we can design a fair, effective, and foolproof death penalty grow more and more tenuous. In response, a powerful coalition of murder victims' families, civil rights leaders, and law enforcement officials — joined by pro-life Catholics, mainline Protestants, and Jewish leaders — has come together to call for repeal of the death penalty in Connecticut and other states. Clearly, lawmakers are listening.”

Rebuttal: Lawmakers are only listening to Abolitionists and not public opinion.

I wonder how Ben Jones can take it if one of his family members were murdered. On Sunday 29 April 2012, 40-year-old Danny E. Gonzalez was found shot dead in Waterbury. I suspect those killers have waited for the repeal to be in force before they murdered someone.