Ten years ago on this date, 9 April 2003, Earl Conrad Bramblett (March 20, 1942 to April 9, 2003) was executed by the electric chair in Virginia. He was convicted of the Hodges family on August 29, 1994. We, the Victims’ Families For the Death Penalty, will remember the victims and not this killer. We are satisfied he felt the pain of electrocution than a painless death of lethal injection.

Summary: The bodies of a family of four were found in their burning house on August 29, 1994. The children and their father were shot in the head. The mother had been strangled. The victims were identified as Blaine and Teresa Hodges and their two children, Anah, 3, and Winter, 11. Authorities immediately suspected Bramblett, a family friend who had been living with the Hodges family. After questioning, authorities believed he knew things about the crime scene that had previously not been reported. .22-caliber bullet casings from his truck matched those at the scene and a pubic hair belonging to Bramblett was found in the girls' bed. Prosecutors theorized that Bramblett murdered the family because he was sexually obsessed with 11 year old Winter, and that Blaine Hodges was using the girl to entrap him in a sex crime. Tapes recovered from Bramblett depicted his sexual attraction toward the eldest daughter. Bramblett claimed all the circumstantial evidence used against him had either been planted or fabricated. He said his pubic hair sample was taken before authorities located the hair on the girls' bed, and that his tape recordings had been altered to give the impression he was attracted to Winter. Bramblett was arrested and charged with the slayings about two years after the murders. The testimony of a jailhouse informant, since recanted, was also presented at trial. Bramblett told him he was "addicted to young girls," and said that he had been caught with one of the children by her mother. The informant testified that Bramblett told him he choked her. After that, Bramblett killed the rest of the family and burned the house to destroy the evidence.

A man who murdered a family of four was put to death in Virginia's electric chair Wednesday, maintaining his innocence to the end. Earl C. Bramblett, 61, was pronounced dead at 9:09 p.m. EDT after the U.S. Supreme Court rejected his appeals and Gov. Mark R. Warner denied his request for clemency. Bramblett was only the third Virginia inmate to die in the electric chair since condemned prisoners were given the option of electrocution or lethal injection in 1995.

A Department of Corrections official then turned a key switch in the wall behind the electric chair, activating the system. An executioner sitting behind a one-way glass immediately pressed a button labeled "execute" and 1,800 volts surged through Bramblett's body, causing him to go rigid and throwing him against the back of the chair. Bramblett's head and right leg were shaved to allow skintight attachments of two electrodes. During the execution, a puff of smoke rose from the electrode on his right leg. After waiting five minutes, Dr. Alvin Harris, a corrections physicians, walked into the death chamber and placed his stethoscope against Bramblett's chest. "This man has expired," Harris announced. 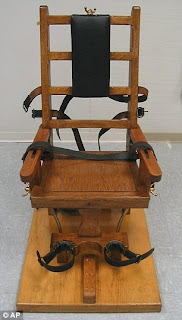 Sarah Lugar, Teresa Hodges's niece, said yesterday that she planned to attend the execution, along with her mother, Brenda Lugar. Sarah Lugar remembered the Hodgeses as an "all-American family." She recalled that her aunt often made homemade bread and that the children loved the movie "Beauty and the Beast." "A lot of pain and suffering will die with [Bramblett] tonight," Sarah Lugar said hours before the execution. "Nothing that we are going to see this evening will be any worse than what he did to them."
Posted by SAINT MICHAEL 2012 at 5:57 PM