THE ARMY OF ANTS OVERWHELMED THE FIERCE SERPENT


We, the comrades of Unit 1012: The VFFDP, are inspired by this quote as, Mark Shields and Mattie Stepanek said respectively:

We believe that teamwork can be successful in achieving our goals, like the army of ants that overwhelmed the fierce serpent that invaded its territory. Our goal is to fight for the defense of capital punishment and fight crime.

Unit 1012 will present the following countries and give examples on how the public unite like hundreds or thousands of ants with or without a true leader to attain their goals:

The 2013 Shahbag protests, associated with a central neighbourhood of Dhaka, Bangladesh, began on 5 February 2013 and later spread to other parts of Bangladesh, as people demanded capital punishment for Abdul Quader Mollah, who had been sentenced to life imprisonment, and for others convicted of war crimes by the International Crimes Tribunal. On that day, the International Crimes Tribunal had sentenced Abdul Quader Mollah to life in prison after he was convicted on five of six counts of war crimes. Later demands included banning the Bangladesh Jamaat-e-Islami party from politics and a boycott of institutions supporting (or affiliated with) the party.

Protesters considered Mollah's sentence too lenient, given his crimes. Bloggers and online activists called for additional protests at Shahbag. Tens of thousands of people joined the demonstration, which gave rise to protests across the country. By mid-April, their numbers had declined, and the original protest site is now clear.

A counter-protest, demanding release of those accused and convicted, was launched by Jamaat-e-Islami as its leaders were the majority of those first identified for trial. The Bangladesh Nationalist Party (BNP) initially expressed its support for Jamaat-e-Islami, a principal political ally. But, the BNP cautiously welcomed the Shahbag protest, while warning the government not to make political mileage from a movement demanding capital punishment for war criminals.

During the protests, Ahmed Rajib Haider, a pro-Shahbag blogger, was brutally killed outside his house by machete-wielding youth. On 2 March, five Jamaat-Shibir activists were arrested; they 'confessed' involvement in Rajib's killing, though independent verification and investigation is not possible at this stage. On 27 February 2013, the tribunal convicted Delwar Hossain Sayeedi of war crimes and sentenced him to death. Jamaat followers protested and there were violent clashes with police. About 60 people were killed in the confrontations; most were Jamaat-Shibir activists, and others were police and civilians.

We swear an oath that the leadership of the mass of people from the Gonojagaran Mancha (National Awakening Stage) will continue the movement from Teknaf to Tetulia until capital punishment is handed down to those Razakar and Al-Badr members who committed crimes against humanity like mass killing and rape in 1971. We take the oath that we will remain vocal, both on the streets and online, until the politics of the war criminals, Jamaat and Shibir, is banned and the citizenship of their members cancelled. We further take the oath that we will continue this demonstration and keep demanding trials, under a special tribunal, of those Razakars and Al-Badr activists who were convicted, and under trial, but freed after 1975. We swear that we will boycott the war criminals' business entities – Islami Bank, Ibn Sina, Focus, Retina and various other coaching centres. We know through these they collect money to continue with their anti-liberation activities. We will also boycott the academic and cultural organisations through which they are spreading anti-liberation sentiments among the children. In brief, we will work for banning all the business, social and cultural organisations belonging to Razakars and Al-Badr activists. We swear that we will continue with our demand for stringent punishment of Jamaat and Shibir, who have committed crimes of sedition by threatening civil war, after making their immediate arrest by recognising them through video footage of news and newspaper pictures. We swear that we will boycott war criminals' mass media like Diganta Television, Daily Naya Diganta, Amar Desh, The Daily Sangram, Sonar Bangla Blog. We will not subscribe to the newspapers of the war criminals at any office or house. At the same time, we request the pro-liberation mass media to boycott the war criminals and their accomplices.

Maninderjeet Singh Bitta was a Minister in Punjab Govt in the govt of Beant Singh (chief minister).

After opposing capital punishment over the years, PM tells Salomon family (Thursday July 27, 2017), who lost three members in terror attack in Halamish, that it's time 'to wipe the smile off the terrorist's face'; while military law allows it, the government needs to change its policy on the matter to enable judges to hand down such a sentence.

"It's time we start giving death sentences to terrorists," the prime minister told the mourning family. "It's enshrined in law, it requires a unanimous decision by the judges, but they also want to know the government's position. And my position as the prime minister, in this instance of such a heinous murderer—he needs to be executed. We need to wipe the smile off his face."
– Israeli PM Benjamin Netanyahu, changed from an opponent to supporter of capital punishment

Bereaved families: 'We must prevent the next murder'
'Choose Life' forum of bereaved families at Yisrael Beytenu meeting on death penalty for terrorists: 'Do everything to prevent terror'
Mordechai Sones, 25/12/17 17:41

Representatives of the "Choose Life" forum of bereaved families were hosted today at a Yisrael Beytenu party meeting.

The meeting dealt with promoting the terrorist death penalty bill the faction is sponsoring together with Choose Life forum members.


In conclusion, we present this book, Equal Justice for Victims: A Blueprint for the Rightful Restoration of Capital Punishment by Lester Jackson as a handbook to rightfully restoring capital punishment. 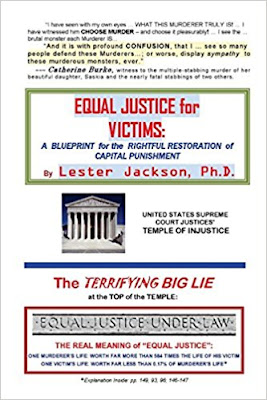 https://www.brighthubpm.com/resource-management/95564-ten-ways-to-halt-conflicts-with-project-team-members/
Posted by SAINT MICHAEL 2012 at 6:00 PM No comments: