JAPANESE MURDERERS EXECUTED IN JAPAN FROM 2008 TO 2010 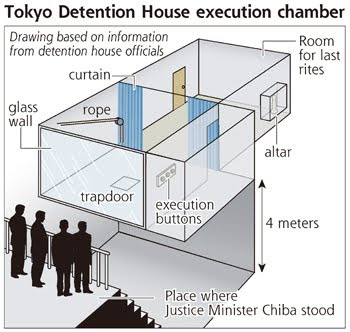 1 FEBRUARY 2008:
Takashi Mochida, 65 was hanged in Tokyo.
CASE: Mochida was initially handed a seven-year prison term in 1989 for burglary and raping a 37-year-old woman in Tokyo. He returned to murder the victim in 1997 after serving his sentence, fatally stabbing her with a kitchen knife several times at a housing complex in Koto Ward.
The Tokyo District Court sentenced Mochida to life imprisonment, but the High Court overturned the sentence and condemned him. The Supreme Court upheld the ruling and his sentence was finalized in October 2004.

Keishi Nago, 37, was hanged in Fukuoka.
CASE: Nago was convicted of fatally stabbing his 40-year-old sister-in-law and his 17-year-old niece in August 2002 at their home in Isencho, Kagoshima Prefecture. His 13-year-old nephew sustained severe chest wounds and was hospitalized for 88 days.
The Kagoshima District Court sentenced Nago to death in 2004 and the sentence was finalized when he withdrew his high court appeal that year.

Masahiko Matsubara, 63, was executed in Osaka.
CASE: Matsubara was convicted of breaking into a home in Yamakawacho, Tokushima Prefecture in April 1988 and raping and murdering a 61-year-old housewife and stealing ¥28,000. He was also found guilty of raping and killing a 44-year-old housewife in Kariya, Aichi Prefecture, two months later, and stealing ¥99,500. Matsubara had been convicted three times for robbery prior to the killings.The Supreme Court upheld the lower court rulings and finalized Matsubara's death sentence in April 1997. He had sought a retrial, but the request was rejected last October.

10 APRIL 2008:
Kaoru Okashita, 61, was executed in Tokyo.
CASE: He was convicted of killing 2 people nearly 20 years ago including an 82-year-old woman with whom he had a property dispute.

Okashita, who also went by the surname Akinaga, later wrote traditional tanka poetry from death row in which he expressed remorse over his crimes and reflected on life waiting to die.

Keiko Mitsumoto, 62, the head of a tanka club who edited and published Okashita's poetry, said she had just sent him back his latest proof-read verse a few days ago.

"He once told me he hoped to live until next year when our group's tanka anthology is published. But his wish wasn't realised," she told AFP, her voice breaking with emotion.

She said that Okashita each month sent her 10 tanka poems -- an ancient
form of Japanese verse with 31 syllables.

"His poetry was very, very gentle and even offered solace and encouragement to me. I could hardly believe he would commit murder," she said.

"He said he feared the day would suddenly come when the footsteps of a guard would stop in front of his cell to announce his execution," she recalled.

"He seemed prepared for that, though, along with not meeting those close to him for a final farewell."

Masahito Sakamoto, 41, was hanged in Tokyo.
CASE: He was convicted of raping and killing a high-school girl.

Katsuyoshi Nakamoto, 64, was hanged in Osaka.
CASE: He was convicted of killing a jeweller and his wife to steal the gems and cash.

Masaharu Nakamura, 61, was hanged in Osaka.
CASE: He was found to have killed two men by drugging their drinks.

CASE: Between 1988 and 1989, Miyazaki mutilated and killed four girls, aged between four and seven, and sexually molested their corpses. He drank the blood of one victim and ate her hands. These crimes — which, prior to Miyazaki's apprehension and trial were named "The Little Girl Murders", and later known as the Tokyo/Saitama Serial Kidnapping Murders of Little Girls (東京・埼玉連続幼女誘拐殺人事件 Tōkyō Saitama renzoku yōjo yūkai satsujin jiken) — shocked Saitama Prefecture, which had few crimes against children.

During the day, Miyazaki was a mild-mannered employee. Outside of work, he randomly selected children to kill. He terrorized the families of his victims, sending them letters recalling in graphic detail what he had done to their children. To the family of victim Erika Nanba, Miyazaki sent a morbid postcard assembled using words cut out of magazines: "Erika. Cold. Cough. Throat. Rest. Death."

He allowed the corpse of his first victim, Mari Konno, to decompose in the hills near his home, then chopped off the hands and feet, which he kept in his closet. They were recovered upon his arrest. He charred her remaining bones in his furnace, ground them into powder, and sent them to her family in a box, along with several of her teeth, photos of her clothes, and a postcard reading: "Mari. Cremated. Bones. Investigate. Prove."

Police found that the families of the victims had something else in common: all were bothered by silent nuisance phone calls. If they didn't pick up the phone, it would sometimes ring for 20 minutes.

Shinji Mutsuda, 37, was hanged in Tokyo.
CASE: He had been on death row for the murder and robbery of two people.

Yoshio Yamasaki, 73, was hanged in Osaka.
CASE: He was convicted of killing two people for the insurance money.

11 SEPTEMBER 2008:
Yoshiyuki Mantani, 68, was hanged in Osaka.
CASE: He was convicted of killing one woman, attempting to kill a second woman and robbing and wounding a third woman in Osaka from August 1987 to January 1988. He had been released from prison on April 30, 1987, after serving an earlier sentence for murder and robbery. His death sentence was finalized in December 2001.

Mineteru Yamamoto, 68, was hanged in Osaka.
CASE: He was convicted of murdering and robbing his cousin and the cousin's wife in July 2004 in Kobe because he wanted gambling money. He also conspired with another to commit three thefts in 2003. His sentence was finalized in April 2006.

Isamu Hirano, 61, was executed in Tokyo.
CASE: was convicted of killing and robbing a ranch owner for whom he was working and the owner's wife in Tochigi Prefecture in December 1994. Hirano also torched the owner's house after the murder. His sentence was finalized in October 2006.

28 OCTOBER 2008:
Michitoshi KUMA, 70, was hanged in Fukuoka.
CASE: He was condemned to death in October 2006 by the Supreme Court. He was accused of murdering 2 young girls (both 7 years old) in February 1992. He claimed his innocence throughout the trial butcourts found him guilty based on the result of DNA test conducted by police, while the other result of the test by Teikyo University was negative. Kuma kidnapped two seven-year-old girls on their way to school in southern Japan in February 1992 and strangled them, dumping their bodies in the mountains.


Masahiro TAKASHIO, 55, was hanged in Sendai.
CASE: He was originally sentenced to life imprisonment by Iwaki Branch of Fukushima District Court,

But Sendai High Court overturned the decision and sentenced him to death. He withdrew his appeal to the Supreme Court and the sentence became final.

He is the 1st executed inmate who's original sentence was life imprisonment AND whose sentence was convicted without exhausting his right to appeal after executions were resumed in 1993. He was accused of murdering 83-year-old mother and her 55-year-old daughter and robbery of about 50,000 yen (approx. 500 US dollars). He broke into a house in northern Japan in March 2004 and stabbing a 55-year-old woman and her 83-year-old mother to death before stealing 50,000 yen, or about $500.

28 JANUARY 2009:
Yukinari Kawamura, 44 and 39-year-old Tetsuya Sato were both hanged in Nagoya.
CASE: They were both convicted of killing two women and burning their bodies in steel barrels.

Shoji Nishimoto, 32 was hanged in Tokyo.
CASE: He was convicted of killing four people in separate home invasion robberies.

Tadashi Makino, 58, was executed in Fukuoka.
CASE: He was convicted of killing four women in separate home invasion robberies.

28 JULY 2009:
Hiroshi Maeue (前上 博 Maeue Hiroshi, August 8, 1968 - July 28, 2009), aka "Suicide Website Murderer", was a Japanese serial killer, who lured his victims via the internet and killed three people in 2005. Maeue suffered from a paraphilic psychosexual disorder which translated into being unable to achieve sexual release absent of performing an act of strangulation.
CASE: Maeue murdered three people after his release in 2005; he was convicted of killing a 14-year-old boy, a 25-year-old woman, and a 21-year-old man, all of whom were members of an online suicide club. He lured his victims by suggesting they meet and end their lives together by committing suicide via a charcoal burner in a sealed car. After a brief conversation, however, he would strangle them with his bare hands. This brought him sexual pleasure, and he later claimed he developed his desire to kill this way after reading of similar events in a mystery novel as a child. All three of his victims were killed within a span of four months.
Trial and death
In his trial, prosecutors called Maeue a "lust murderer." On March 28, 2007, the Osaka District Court sentenced him to death. Although his defence team launched an appeal, he accepted the judgment of the court and expressed a willingness to pay for his crimes with his life, retracting his protest in July 5, 2007.
On July 28, 2009, Hiroshi Maeue was hanged in Osaka, along with 25-year-old condemned criminal Yukio Yamaji.

Yamaji Yukio (山地 悠紀夫 Yamaji Yukio, August 21, 1983 – July 28, 2009) was a Japanese triple killer. He murdered his own mother in 2000, and then murdered a 27-year-old woman and her 19-year-old sister in 2005.
CASE: Yamaji was born into a poor family and his father died of cirrhosis in January 1995. After he graduated from junior high school, he did not enter high school and began working at the newspaper store. He killed his 50-year-old mother with a metal baseball bat in Yamaguchi, Yamaguchi Prefecture on July 29, 2000 at the age of 16. He called the police and was arrested on July 31. One of his motives was his mother's silent telephone to the woman who he fell in love with. Another motive was his mother's debt. He was paroled in October 2003 and was released officially in March 2004. However, his work after the release was illegal.
On November 17, 2005, Yamaji raped a 27-year-old woman and her 19-year-old sister and murdered them with a knife, in Naniwa, Osaka. He then set fire to their room and escaped. The two victims had never met Yamaji. He was arrested on December 5, 2005. He said to the Osaka police, "I could not forget the feeling when I killed my mother, and wanted to see human blood."
On December 13, 2006, the Osaka District Court sentenced him to death. His defense made an appeal but he retracted it on May 31, 2007. His execution by hanging took place in Osaka on July 28, 2009.

Chen Detong, 41, was hanged in Tokyo.
CASE: He was executed in Tokyo for killing three of his compatriots and injuring three more in Kawasaki, southwest of Tokyo, in 1999.

28 JULY 2010:
Kazuo Shinozawa, 59 was hanged in Tokyo.
CASE: He received a death sentence after he was found guilty of setting fire to a jewelry shop in Utsunomiya, Tochigi Prefecture, in June 2000. Shinzawa was taking part in a robbery which netted ¥140 million ($1.6 million). Six female workers from the jewelry shop died in the fire.

Hidenori Ogata, 33 was executed in Tokyo.
CASE: He was convicted of murder over the deaths of a man and a woman, and was also convicted of attempting to murder two other women in Kumagaya, Saitama Prefecture, in 2003. stabbed a man and woman to death in 2003.
Posted by SAINT MICHAEL 2012 at 9:30 PM No comments: