For this observance, we will present murdered victims from 1900 to 1980:

2. Paul Robert Schneider (August 29, 1897 – July 18, 1939) was an Evangelical Church of the old-Prussian Union pastor who was the first Protestant minister to be martyred by the Nazis. He was murdered with a strophanthin injection at Buchenwald.

3-84. THE MEMORIAL TO THE 82 MURDERED CHILDREN OF LIDICE (JULY 2, 1942)
On this date, July 2, 1942, all of the remaining 81 Lidice children were handed over to the Łódź Gestapo office, who in turn had them transported to the extermination camp at Chełmno 70 kilometers (43.5 miles) away, where they were gassed to death in Magirus gas vans. Out of the 105 Lidice children, 82 died in Chełmno, six died in the German Lebensborn orphanages and 17 returned home.

A sculpture from the 1990s by Marie Uchytilová stands today overlooking the site of the old village of Lidice. Entitled "The Memorial to the Children Victims of the War" it comprises 82 bronze statues of children (42 girls and 40 boys) aged 1 to 16 to honour the children who were executed at Chełmno in the summer of 1942. A cross with a crown of thorns marks the mass grave of the Lidice men. Overlooking the site is a memorial area flanked by a museum and a small exhibition hall. The memorial area is linked to the new village by an avenue of linden trees. In 1955 a "Rosarium" of 29,000 rose bushes was created beside the avenue of lindens overlooking the site of the old village. In the 1990s the Rosarium was neglected, but after 2001 a new Rosarium with 21,000 bushes was designed and created. Situated 500 metres (1,600 ft) from the museum, in the new village, is an art gallery which displays permanent and temporary exhibitions. The annual children's art competition attracts entries worldwide.

85. Janusz Korczak, the pen name of Henryk Goldszmit (22 July 1878 or 1879 – August 1942), was a Polish-Jewish educator, children's author, and pediatrician known as Pan Doktor ("Mr. Doctor") or Stary Doktor ("Old Doctor"). After spending many years working as director of an orphanage in Warsaw, he refused freedom and stayed with his orphans when the institution was sent from the Ghetto to the Treblinka extermination camp, during the Grossaktion Warsaw of 1942. 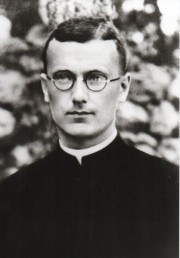 86. Franz Reinisch SAC (February 1, 1903 - August 21, 1942) was a member of the Schoenstatt Movement. He was a Catholic priest and refused to take the oath of allegiance to Hitler, for which he was executed.
87. Bishop Gorazd of Prague, given name Matěj Pavlík (May 26, 1879 – September 4, 1942), was the hierarch of the revived Orthodox Church in Moravia, the Church of Czechoslovakia, after World War I. During World War II, having provided refuge for the assassins of SS-Obergruppenfuhrer Reinhard Heydrich, called The Hangman of Prague, in the cathedral of Saints Cyril and Methodius in Prague, Gorazd took full responsibility for protecting the patriots after the Schutzstaffel found them in the crypt of the cathedral. This act guaranteed his execution, thus his martyrdom, during the reprisals that followed. His feast day is celebrated on August 22 (OC) or September 4 (NC).

88. Henio Zytomirski (Polish: Henio Żytomirski, Hebrew: הניו ז'יטומירסקי; 25 March 1933 – 9 November 1942) was a Polish Jew born in Lublin, Poland who was murdered at the age of 9 in a gas chamber at Majdanek concentration camp, during the German Nazi occupation of Poland. Henio became an icon of the Holocaust, not only in Lublin but all over Poland. His life story became a part of the curriculum which is learnt in the general education system in Poland. The "Letters to Henio" project is held in Lublin since 2005. Henio Zytomirski is one of the heroes of "The Primer" permanent exhibition at barrack 53 of the Majdanek Museum, an exhibition which is dedicated to children who were in the camp.

89. Sophia Magdalena Scholl (9 May 1921 – 22 February 1943) was a German student and Christian anti-Nazi political activist, active within the White Rose non-violent resistance group in Nazi Germany.
She was convicted of high treason after having been found distributing anti-war leaflets at the University of Munich (LMU) with her brother Hans. As a result, they were both executed by guillotine. Since the 1970s, Scholl has been extensively commemorated for her anti-Nazi resistance work.
She was the daughter of the liberal politician Robert Scholl, an ardent critic of the Nazis.

90. Czesława Kwoka (15 August 1928 Wólka Złojecka – 12 March 1943 Auschwitz) was a Polish Catholic child who died in the Auschwitz concentration camp at the age of 14. She was one of the thousands of child victims of German World War II crimes against Poles. She died at Auschwitz-Birkenau, in Poland, and is among those memorialized in the Auschwitz-Birkenau State Museum indoor exhibit called Block no. 6: Exhibition: The Life of the Prisoners.

91-101. The Blessed Martyrs of Nowogródek, also known as the Eleven Nuns of Nowogródek or Sister Stella and Companions were a group of Roman Catholic nuns from the Sisters of the Holy Family of Nazareth killed by the against the Gestapo in August 1943 in present-day Belarus.

102. Blessed Franz Jägerstätter, O.F.S., (in English also spelt Jaegerstaetter) (20 May 1907 - 9 August 1943) (born as Franz Huber) was an Austrian conscientious objector during World War II. Jägerstätter was sentenced to death and executed. He was later declared a martyr and beatified by the Catholic Church. 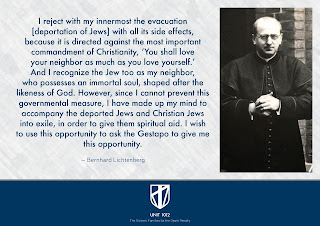 103. The Blessed Bernhard Lichtenberg (3 December 1875 – 5 November 1943) was a German Roman Catholic priest and theologian, who died while in the custody of forces of the Third Reich. He has been awarded the title of Righteous among the Nations, and has been beatified by the Catholic Church.

106. Claus Philipp Maria Schenk Graf von Stauffenberg, commonly referred to as Claus Schenk Graf von Stauffenberg (German: [ˈklaʊs ˈʃɛŋk ˈɡʁaːf fɔn ˈʃtaʊfənbɛɐ̯k]), Claus von Stauffenberg, or Colonel Claus von Stauffenberg (15 November 1907 – 21 July 1944), was a German army officer and aristocrat who was one of the leading members of the failed 20 July plot of 1944 to assassinate Adolf Hitler and remove the Nazi Party from power. Along with Henning von Tresckow and Hans Oster, he was one of the central figures of the German Resistance movement within the Wehrmacht. For his involvement in the movement he was executed by firing squad shortly after the failed attempt known as Operation Valkyrie.

107. Blessed Sára Salkaházi, S.S.S. (Kassa, May 11, 1899 - Budapest, December 27, 1944), born as Sára Schalkház, was a Hungarian Roman Catholic religious sister who saved the lives of approximately one hundred Jews during World War II. Denounced and summarily executed by the Pro-Nazi Arrow Cross Party, Salkaházi was beatified in 2006.

108-907. On this date, October 10, 1944, 800 children were gassed to death in Auschwitz Concentration Camp. Let us remember those children in the holocaust.
908. Helmuth James Graf von Moltke (11 March 1907 – 23 January 1945) was a German jurist who, as a draftee in the German Abwehr, acted to subvert German human-rights abuses of people in territories occupied by Germany during World War II and subsequently became a founding member of the Kreisau Circle resistance group, whose members opposed the government of Adolf Hitler in Nazi Germany.
The Nazi government executed von Moltke for treason, he having discussed with the Kreisau Circle group the prospects for a Germany based on moral and democratic principles that could develop after Hitler.
He was the great-grandnephew of Helmuth von Moltke the Elder, the victorious commander in the Austro-Prussian and Franco-Prussian Wars, from whom he inherited the Kreisau Estate in Prussian Silesia, now Krzyżowa in Poland.

909. Alfred Delp (15 September 1907 in Mannheim, Grand Duchy of Baden – 2 February 1945 in Berlin) was a German Jesuit priest and a philosopher of the German Resistance. Part of the inner Kreisau Circle resistance group, he is considered a significant figure in Catholic resistance to Nazism. Implicated in the failed 1944 July Plot to overthrow the Nazi dictator Adolf Hitler, Delp was arrested, and sentenced to death. He was executed in 1945.

Do not forget the victims of the Holocaust during World War II: 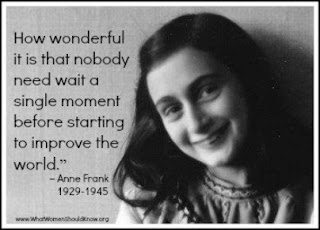 910. Anne Frank A.K.A Annelies Marie "Anne" Frank (Dutch pronunciation: [ɑnəˈlis ˈɑnə maˈri frɑŋk], German pronunciation: [anəliːs ˈanə maˈʁiː fʁaŋk], pronunciation (help·info); 12 June 1929 – early March 1945) is one of the most discussed Jewish victims of the Holocaust. Her wartime diary The Diary of a Young Girl has been the basis for several plays and films. Born in the city of Frankfurt in Weimar Germany, she lived most of her life in or near Amsterdam, in the Netherlands. Born a German national, Frank lost her citizenship in 1941. She gained international fame posthumously after her diary was published. It documents her experiences hiding during the German occupation of the Netherlands in World War II. 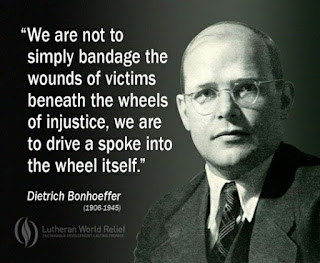 911. Dietrich Bonhoeffer (German: [ˈdiːtʁɪç ˈboːnhœfɐ]; February 4, 1906 – April 9, 1945) was a German Lutheran pastor, theologian, dissident anti-Nazi and founding member of the Confessing Church. His writings on Christianity's role in the secular world have become widely influential, and many have labelled his book The Cost of Discipleship a modern classic.
Apart from his theological writings, Bonhoeffer became known for his staunch resistance to the Nazi dictatorship. He strongly opposed Hitler's euthanasia program and genocidal persecution of the Jews. He was also involved in plans by members of the Abwehr (the German Military Intelligence Office) to assassinate Adolf Hitler. He was arrested in April 1943 by the Gestapo and executed by hanging in April 1945 while imprisoned at a Nazi concentration camp, just 23 days before the German surrender.

913. Solomon (Shloyme) Mikhoels (16 March [O.S. 4 March] 1890 – 13 January 1948) was a Soviet Jewish actor and the artistic director of the Moscow State Jewish Theater. Mikhoels served as the chairman of the Jewish Anti-Fascist Committee during the Second World War. However, as Joseph Stalin pursued an increasingly anti-Semitic line after the War, Mikhoels' position as a leader of the Jewish community led to increasing persecution from the Soviet state. In 1948, Mikhoels was murdered on the orders of Stalin and his body was run over to create the impression of a traffic accident.

914-926. On this date, August 12, 1952, 13 prominent Jewish intellectuals were murdered in Moscow, Russia, Soviet Union. This case is also known as The Night of The Murdered Poets.

Leib Kvitko (Russian: Лейб Квитко, Yiddish: לייב קוויטקאָ‎) (October 15, 1890 – August 12, 1952) was a prominent Yiddish poet, an author of well-known children's poems and a member of the Jewish Anti-Fascist Committee (JAC). He was one of the editors of Eynikayt (the JAC's newspaper) and of the Heymland, a literary magazine. He was executed in Moscow on August 12, 1952 together with twelve other members of the JAC, a massacre known as the Night of the Murdered Poets. Kvitko was rehabilitated in 1955.

927. Emmett Louis Till (July 25, 1941 – August 28, 1955) was an African-American boy who was murdered in Mississippi at the age of 14 after reportedly flirting with a white woman. Till was from Chicago, Illinois, visiting his relatives in Money, Mississippi, in the Mississippi Delta region, when he spoke to 21-year-old Carolyn Bryant, the married proprietor of a small grocery store there. Several nights later, Bryant's husband Roy and his half-brother J. W. Milam went to Till's great-uncle's house. They took Till away to a barn, where they beat him and gouged out one of his eyes, before shooting him through the head and disposing of his body in the Tallahatchie River, weighting it with a 70-pound (32 kg) cotton gin fan tied around his neck with barbed wire. Three days later, Till's body was discovered and retrieved from the river.

931. Etan Kalil Patz (October 9, 1972 - declared legally dead in 2001) was an American child who was six years old when he disappeared in Lower Manhattan, New York City, on May 25, 1979. He is the most famous missing child of New York City. His disappearance helped spark the missing children's movement, including new legislation and various methods for tracking down missing children, such as the milk-carton campaigns of the mid-1980s. Etan was the first ever missing child to be pictured on the side of a milk carton.