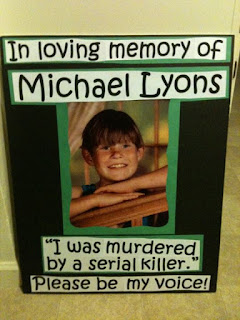 984. JonBenét Patricia Ramsey (August 6, 1990 – December 25, 1996) was an American child beauty pageant queen who was murdered in her home in Boulder, Colorado, in 1996. The six-year-old's body was found in the basement of the family home about eight hours after she was reported missing during a police search of her home. She had been struck on the head and strangled. The case remains unsolved, even after several grand jury hearings, and continues to generate public and media interest.
985. Barry Van Treese (December 3, 1942 to January 7, 2007)

989. James Byrd, Jr. (May 2, 1949 – June 7, 1998) was an African-American who was murdered by three men, of whom at least two were white supremacists, in Jasper, Texas, on June 7, 1998. Shawn Berry, Lawrence Russell Brewer, and John King dragged Byrd for three miles behind a pick-up truck along an asphalt road. Byrd, who remained conscious throughout most of the ordeal, was killed when his body hit the edge of a culvert, severing his right arm and head. The murderers drove on for another mile before dumping his torso in front of an African-American cemetery in Jasper. Byrd's lynching-by-dragging gave impetus to passage of a Texas hate crimes law. It later led to the federal Matthew Shepard and James Byrd, Jr. Hate Crimes Prevention Act, commonly known as the Matthew Shepard Act, which passed on October 22, 2009, and which President Barack Obama signed into law on October 28, 2009.

Lawrence Russell Brewer was executed by lethal injection for this crime by the state of Texas on September 21, 2011. King remains on Texas' death row while appeals are pending, while Berry was sentenced to life imprisonment.

Rachel Joy Scott (August 5, 1981 – April 20, 1999) was an American student and the first murder victim of the Columbine High School massacre, which claimed the lives of 12 students and a teacher, as well as both perpetrators.
She has since been the subject of several books and is the inspiration for Rachel's Challenge, a nationwide school outreach program for the prevention of teen violence, based on her life and writings.

1005-1020. The NATO bombing of the Radio Television of Serbia headquarters occurred on 23 April 1999, during the Kosovo War.

2014 National Day of Remembrance for Murder Victims
http://victimsfamiliesforthedeathpenalty.blogspot.com.au/2014/09/2014-national-day-of-remembrance-for.html
Posted by SAINT MICHAEL 2012 at 3:30 AM