Mayci Breaux will always be remembered by Unit 1012. As she was born on September 25, 1993, we will remember her on her birthday and treasure the precious memories of her life on earth.

Funeral services celebrating the life of Mayci Marie Breaux will be held during an 11:00 AM Mass of Christian burial on Monday, July 27, 2015, at the Church of the Assumption in Franklin. Burial will follow in the Franklin Cemetery. Father Lloyd Benoit will be the Celebrant for the Mass and conduct the services.

A gathering of family and friends will be held Sunday at Ibert's Mortuary in Franklin from 5:00 PM until 9:00 PM, with the Cursillo Rosary being prayed at 6:00 PM, led by the Franklin Men's Ultreya Group. Visiting hours will resume at Ibert's at 8:00 AM and continue until time of dismissal at 10:30 AM.

Mayci was a loving, kind, beautiful, and vibrant young lady, who had a wonderful personality and a smile that would light up even the darkest of rooms. She was a 2012 graduate of Hanson Memorial High School and was currently attending LSUE where she was studying to be an ultrasound and radiology technician. One of her many loves in life was dancing, which she started at a very young age, but her true passion in life was being surrounded by her family. She will be deeply missed and fondly remembered by all who knew and loved her.

Family and friends may view the obituary and express their condolences online by visiting www.iberts.com.

One of the fatal victims of John Russell Houser‘s shooting spree at a movie theater in Lafayette, Louisiana, has been named as 21-year-old Mayci Breaux. Authorities revealed her identity, along with the other slain victim, Jillian Johnson, 32, in a press conference the morning after the attack.

On the evening of July 23, cops says “drifter” John Houser stood up during a screening of Trainwreck and began firing on the audience. Police believe he planned to escape alive, but as cops closed in faster than expected, Houser took his own life. Breaux was killed at the scene, while Johnson died later at a local hospital.

Here’s what you need to know about Mayci Breaux:

1. She Was an ‘Amazing Young Woman’ Who Studied Hard & Loved Her Family

Breaux was native of Franklin, Louisiana, but was living in Lafayette, according to her Facebook page. She was a student at Louisiana State University in Eunice, studying to become a radiologist. Despite her studies — she maintained a 3.8 GPA — Breaux always visited home every weekend, according to her mother. Prior to enrolling at LSU she got a basic studies degree from Louisiana Community College.

She was employed by the women’s clothing store Coco Eros in Lafayette. A tribute was written to Breaux on the store’s Facebook page:

“Nothing ever prepares you for a loss… Much less the loss of such an amazing young woman. We are deeply saddened by this loss. Many of you had come to know and love Mayci and we ask that you pray for her family and friends during this tragic time.”


She’s survived by her parents, Kevin and Dondie, as well as a sister, Ali Elizabeth, and brother, Dustin. Her sister, speaking to the New York Daily News, said, “I’m going to miss her cheering me up, talking some sense into me whenever I’m being a dumb teenager. I miss her honesty, her humor, her smile — everything about her.”

According to his Facebook page, her father is a sugar cane farmer. He was featured in the January 2011 issue of the Louisiana Sportsman thanks to his bagging of a massive buck.

Named as the most beautiful student at her high school, 21-year-old Mayci Breaux's life was cut tragically short when all she was trying to do was go to the movies.

2. She Was Voted ‘Most Beautiful’ in Her High School Graduating Class

In 2014, Breaux was a finalist in the Louisiana Sugar Cane beauty competition. One profile mentions that during her time in high school, she was voted most beautiful and was co-captain of the school’s cheerleading team in her junior and senior years. Breaux studied dancing for 17 years.

3. She Was a Pro-Life Activist

In the February 2013 edition of the St. Mary and Franklin Banner-Tribune, it’s written that Breaux was a pro-life activist and marched on Washington, D.C., as part of rally in March 2011. The piece also mentions that she was active in her high school’s Christian Ministry while she was in high school. In December 2012, on her Twitter page, Breaux retweeted a message that read, “During pregnancy if a mother suffers organ damage, the baby in the womb sends stem cells to repair the damaged organ.” Alabama.com reports that Calvin Floyd, who hosted a morning phone-in on WLTZ-TV in Georgia, said the Houser was a regular caller and would advocate for violence against abortion doctors and pro-choice activists.

4. Her Boyfriend, the Love of Her Life, Was Also Wounded in the Shooting

Breaux’s longtime boyfriend and high school sweetheart, Matthew Rodriguez, was wounded in the attack but not critically. The couple were sitting in the back row of the theater together. Her sister, Ali, told the Daily News that the two had known each other since childhood but it wasn’t until high school when the romance blossomed. Speaking to the Daily News, Ali Breaux said, “I remember being in the car with her when he Facebook messaged her and freaking out. He was that hot guy. She was so excited.” On Breaux’s Facebook page, nearly all of her photos are dedicated to him. The couple had been together since 2012.

Her mother, Dondie, told the New York Daily News that the couple had discussed marriage and having children together. Dondie Breaux said, “They were so good for each other. They had so many plans — just to get married, have kids. I think it would have been soon. I feel angry that she was right there in front of him. I feel just angry and lonely. I’m just heartbroken.”

5. Her Cousin Wants the Shooter’s Motive to ‘Die With His Useless Life’ 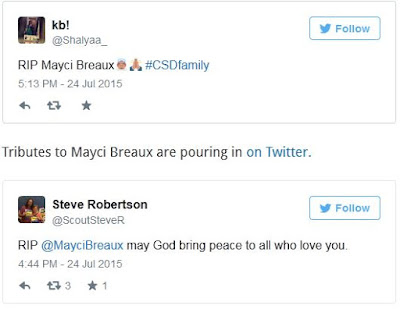 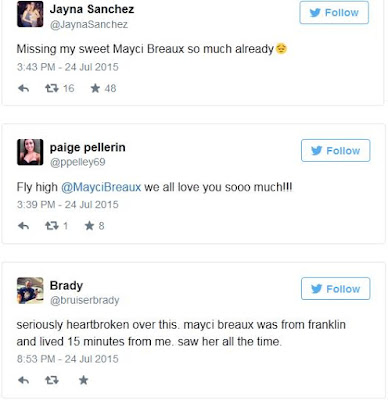 There was another touching tribute to her given on Instagram by rapper Lil Kevin:

Rest N Peace To Mayci Breaux ! She Was One Of The Victims That's Was Killed Tonight N The Movie Theaters Shooting N Lafayette, La.! She Was 21 years Old Would've Been 22 Sep 5th.. She Was a Franklin , La Relative That Graduated From Hanson Memorial Class Of '12 That's A Town 10 Mins From Where I'm From.. Please Send Prayers Out To Her Family 🙏🏽🙏🏽 #RipSweetie #FlyHigh #MakePositiveOutOfNegative #Lafayette #Louisiana

In reference to Houser, one of her cousins, Meghan Breaux, wrote on Facebook:

"I really hope the media doesn’t focus attention to this creep’s “motive.” If his reason for ending beautiful lives was to send a message, that message does not deserve to be heard. I don’t think knowing “why” is going to ease the pain. Let his motive die with his useless life."

Her friend, Emma Todd, also posted pictures of her and Breaux together, with one friend commenting, “Emma I’m so sorry for your loss of such a good friend.”