TEXAS DOES NEED THE DEATH PENALTY! (THE EXECUTION OF PETER ANTHONY CANTU ON AUGUST 17, 2010)


On this date, August 17, 2010, Peter Anthony Cantu was the third of the three convicted killers of Jennifer Ertman and Elizabeth Pena on 24 June 1993 to be executed by lethal injection in Texas. Sean O’Brien was the first one and Jose Ernesto Medellin was the second one. I wish there was a Joint Enterprise Law and all six of them would have been executed.

We personally respect Ron Carlson for being forgiving and we respect his opposition to the death penalty but we disagree with his statement to the Ertman and Pena Family. We will write a rebuttal essay to explain why. 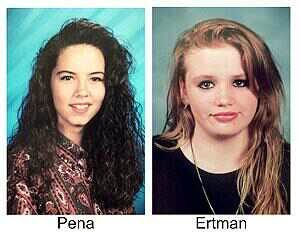 To the Ertman and Pena families:

I can’t say that I know how you feel concerning the loss of your loved ones Jennifer Ertman and Elizabeth Pena. The images of those two beautiful girls will forever be in my mind as well as the horrifying act of their demise. What I can say is that I can relate to it due to the fact that I have had two people murdered in my family. On June 13th, 1983 my sister Deborah Ruth Carlson Davis Thornton was murdered by Karla Faye Tucker and Daniel Ryan Garret. On October 17th, 1984 my father William Gerald List was murdered by Elbert Smiley Homan.

I can say that I understand your wants and desires for justice concerning Peter Cantu. I have difficulty in believing that the execution of Peter Cantu will provide any sort of closure concerning the case.

REBUTTAL: Regardless of whether closure or not, most victims’ families want justice and protection. Three of the six gangsters were executed and there will never be a chance of them hurting anybody again.

I can truthfully say that, since I have personally witnessed an execution. I had hoped and prayed that I would receive closure and that would be the end of it.

What I did learn that night was that another set of victims were created and that the cycle of violence continued.

REBUTTAL: We respect Ron Carlson if he wants to believe that another set of victims were created. But for the Ertman and Pena family (and many others like us), they do not feel that way. There are victims’ families who felt justice was served years later.

I state this because when I forgave those who destroyed my family, I found that I was more at peace concerning the loss of my loved ones. We can never forget them, but we can honor them.

REBUTTAL: Well done, Ron Carlson is right to preach of forgiveness but forgiveness does not eliminate consequences. We, the comrades of Unit 1012: The VFFDP, who are families or friends of victims and some homicide survivors, do not want revenge but justice and protection.

“We can never forget them, but we can honor them.”

Exactly, Unit 1012 remembers the victim on their birthday and their death date. We do NOT listen to the ACLU Demons who want to manipulate the public to glorify criminals. We prefer remembering people who are murdered victims, heroes, Saints and those awarded the Righteous Among The Nations.

Two of the men sent to death row for this gang rape and murder were juveniles and were taken off death row in 2005 when the US Supreme Court outlawed sentencing juvenile to death. They were given life. The earth did not crumble. Texas did not disintegrate. The world continued to rotate on its axis--in other words, life went on and the two juveniles are in prison but not facing death.

REBUTTAL: Ron Carlson, you forget to mention that the SCOTUS had now made LWOP unconstitutional for Juveniles on June 25, 2012. We understand that this statement was made in August 2010, but now there is even more bad news for the Ertman and Pena Families, as they have to beg the Parole Boards not to release the two juveniles from Prison. If you truly care for the families, assist them in blocking parole.

Say ‘Thank You’ to the ACLU Demons who are so happy for it. Yamaji Yukio, Rogelio Cannady, Abdullah T. Hameen and Lee Andrew Taylor were several perfect examples of juvenile killers who murdered again when they were released or killed behind bars, now they were all executed and will never murder again.

A great example of a Juvenile Killer is "T. J." Lane, the Chardon High School Shooter:

As Lane was still a juvenile when he committed the school shooting, he will not be put to death. Even if he was sentenced to three consecutive life sentences, we are concern whether the sentence will be what it is, as LWOP had been declared unconstitutional for juveniles by the SCOTUS on June 25, 2012.

His antics in court, not only reviewed to the public that he was unremorseful for his crimes but also tells that he is still a real danger to society. Be warned! He might be a violent lifer in prison where he might murder behind bars. We suggest showing this criminal profile to any ACLU demon and they will remain silent.

We do not need the death penalty.

We do not need the state of Texas to kill people who kill to show that killing is wrong.

REBUTTAL: We STRONGLY DISAGREE HERE! We, the comrades of Unit 1012: The VFFDP want justice and protection. We want to protect our country and we care for the grieving victims and their families, who want peace. We do not want hundreds of Kenneth McDuffs (he murdered 2 children, had his death sentence commuted, paroled only to become a serial killer to murder more women) to kill us and reduce our population. We do not want to keep begging the parole boards to not release killers, we want them dead.

“Mercy to the guilty is cruelty to the innocent.”
- Adam Smith

“We do not need the state of Texas to kill people who kill to show that killing is wrong.”

Does fining a criminal show want of respect for property, or imprisoning him, for personal freedom? Just as unreasonable is it to think that to take the life of a man who has taken that of another is to show want of regard for human life. We show, on the contrary, most emphatically our regard for it, by the adoption of a rule that he who violates that right in another forfeits it for himself, and that while no other crime that he can commit deprives him of his right to live, this shall.


Ron Carlson, if you oppose the death penalty, it is your right but do not work for abolition. As Thomas Mann said:

“Tolerance becomes a crime when applied to evil.”
- Thomas Mann