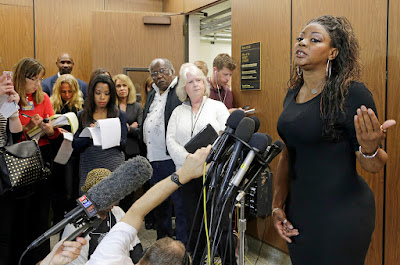 Family members of victims in the Grim Sleeper serial killings shed tears and came together in prayer outside a Los Angeles courtroom after the man charged in the slayings was found guilty Thursday on 10 counts of murder, bringing some measure of closure.

"It's a big day today that the jury came in and rendered a verdict - guilty. It's a great relief to have heard that," said Porter Alexander, the father of Alicia "Monique" Alexander, who was found dead in an alley at 18 in 1988.

"He took my baby," he said as he struggled to hold back tears. "From day one she was with me until he took her, my baby."

Lonnie David Franklin Jr., a 63-year-old former trash collector and mechanic for the LAPD, was convicted of killing nine women and a teen girl over a 22-year period, dumping their bodies in alleys and trash bins around South Los Angeles.

"It's closure," said Irene Ephriam, the niece of Henrietta Wright, shot twice in the chest and found dead in an alley in 1986. "We needed this, and it hurted (sic) our family to lose her. It kind of destroyed us - she had five kids."

For Samara Herard, the sister of 15-year-old Princess Berthomieux, discovered strangled in an alley in 2002, the pain of losing a loved one brought her close to others grieving a loss.

"We are a family now, because we're tied together, because we went through this together," Herard said. "We care about each other's family members, because we share a similar core of pain, the pain of losing someone who didn't deserve to be lost."

Outside the courtroom, the families bowed their heads and prayed. They gave thanks for the beginning of closure and healing of a case that spanned more than two decades.

Prosecutors will seek the death penalty for Franklin. The penalty phase begins May 12.

"What goes around, came around and now it's his turn," Alexander said. "He was the judge and executioner. He judged my daughter in the sense of what he felt when he took her life. An eye for an eye, a tooth for a tooth."
Posted by SAINT MICHAEL 2012 at 11:45 AM