IF ANY ANTI-DEATH PENALTY CAMPAIGNER SPEAKS OF WRONGFUL EXONERATION, SHOW THEM THIS…. ANTHONY PORTER AND ALSTORY SIMON


After learning about the Anthony Porter Case, We, the comrades of Unit 1012, NEVER and DO NOT support any wrongful conviction, we want the guilty to be punished. However, we know that the ACLU Demons, uses the word, ‘innocent convicted’ not because they fear convicting the innocent, but they just oppose convicting the guilty.

On this date, October 30, 2014, Alstory Simon was freed from Prison after spending nearly 15 years behind bar after being framed by the Innocence Project. We encourage the public to never believe in those Anti-Death Penalty Activists (Pro Murderers and murder victims haters) send by Satan anymore, as they enjoy LYING AND LYING SO MUCH!

Former death row inmate Anthony Porter, at the center of one of the most controversial wrongful conviction cases in Illinois history, was a no-show in federal court Monday even though he faced the threat of arrest for not coming in to explain why he'd skipped out on a recent deposition.

But instead of issuing a warrant for Porter's arrest, U.S. Magistrate Judge David Weisman decided to order him again to sit for his deposition, this time on June 6. If he fails to show for that testimony, he could then be taken into custody.

Porter was supposed to give sworn testimony this month in the bombshell case brought by Alstory Simon, who has accused Northwestern University, its former star professor David Protess and others of conspiring to free Porter and convict Simon for an infamous 1982 double murder.

After Porter failed to appear for his deposition at a Loop law office, Weisman last week ordered him to come into court and explain his absence.

While Porter did not show, his new attorney, Tara Thompson of the Loevy and Loevy law firm, told Weisman she needed more time to research the case and file a possible objection to the deposition based on Porter's mental state.

"It was my hope and my desire that he would be here, although as the court can see, he is not," said Thompson, who is representing Porter pro bono. "That said, I do have concerns from conversations (with Porter) ... that there are competency issues at play here."

He left the school in 2011 amid controversy over tactics allegedly employed by his students, including giving witnesses money for drugs, lying about their identities and flirting with witnesses.

Northwestern, Protess and Ciolino have all denied wrongdoing.
jmeisner@chicagotribune.com 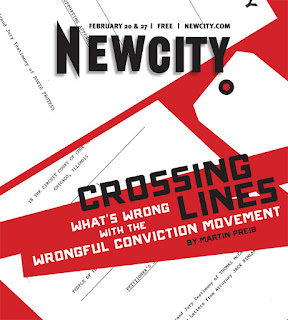 Alstory Simon, talking to reporters about his mother dying while he was incarcerated, was released Oct. 30, 2014, from the Jacksonville Correctional Center in Jacksonville, Ill.

An appeals court has breathed new life into efforts by Alstory Simon to win a certificate of innocence three years after Cook County prosecutors agreed to free him, rewriting the story of a double-murder case that ultimately ended capital punishment in Illinois.

While the court stopped short of granting the certificate — a disappointment for Simon, whose lawyer said he might appeal — it did order a new hearing and gave Simon another chance to make his case in the protracted legal battle.

Simon's bombshell convictions for murder and manslaughter were thrown out in 2014 by the Cook County state's attorney at the time, Anita Alvarez, who told reporters that "alarming tactics that were not only coercive but absolutely unacceptable by law enforcement standards" had been used by a former Northwestern University professor and a private investigator to obtain Simon's videotaped confession.

That 1999 confession, aired on local TV, led to the release of Anthony Porter, who was then on death row for a double slaying on the South Side in 1982. His release helped spur the governor at the time, George Ryan, to halt executions in Illinois, a step toward the abolition of the death penalty here in 2011.

But the release of Simon, who claimed he pleaded guilty because he had been promised money from book or movie deals, raised the possibility that a guilty man had been freed.

Indeed, Cook County Judge Thomas Byrne in 2015 found that Simon was most likely innocent in the slaying of Marilyn Green and the voluntary manslaughter of Jerry Hillard, but ruled Simon was barred from receiving a certificate of innocence because he had helped bring about his own confession and had not alleged any wrongdoing by prosecutors.

Last week, the state appellate court panel did not take issue with Byrne's ruling, but said the judge improperly based on it on evidence not admitted into the record, depriving Simon of any chance to respond or address it. It ordered a new hearing on Simon's petition. Prosecutors didn't oppose the certificate or appeal.

Simon's attorney Terry Ekl said he was unhappy with the ruling and will most likely seek permission from the Illinois Supreme Court to appeal. He said the certificate should have been granted based on the uncontested evidence presented to the judge.

"It makes no sense whatsoever," he said. "(Our appeal) sat there for two years and then they came back with this evidentiary hearing so we can contest evidence that was never presented to the court."

Simon, who is 67 and now living in Ohio, alleges he was framed by former Northwestern professor David Protess and private investigator Paul Ciolino, who Simon says fabricated evidence to free Porter from death row. In a pending $40 million federal lawsuit, Simon alleges Protess and Ciolino, manufactured bogus evidence, coaxed false statements from witnesses, intimidated Simon into confessing and set him up with a lawyer, Jack Rimland, who coached him to plead guilty.

They have denied wrongdoing, as has Northwestern, which is also named in the lawsuit. Protess left Northwestern in 2011 amid controversy over tactics allegedly employed by his students, including giving witnesses money for drugs, lying about their identities and flirting with witnesses.

The federal judge hearing Simon's lawsuit threatened to issue an arrest warrant for Porter this month after he failed to show for scheduled deposition or a court hearing to explain why. U.S. Magistrate Judge David Weisman instead ordered Porter to sit for a June 6 deposition.
If he again fails to show, Porter could then be taken into custody. Porter was awarded about $150,000 by the state in 2000 for his wrongful imprisonment and also was given a certificate of innocence.

But his $24 million lawsuit against the city and two Chicago police detectives failed when a Cook County jury sided with the police and awarded him no damages.

If he wins an innocence certificate, Simon can have his conviction expunged from the record and become eligible for $200,000 from the state. It would also aid his pending federal lawsuit.
sschmadeke@chicagotribune.com
Twitter @SteveSchmadeke

PLEASE GO TO THE FOLLOWING LINKS:

The Myth of Innocence by Joshua Marquis
http://victimsfamiliesforthedeathpenalty.blogspot.com.au/2016/07/the-myth-of-innocence-by-joshua-marquis.html