Seven years ago on this day, an up and coming British model, Sally Anne Bowman was murdered in Croydon, London. I felt very deeply for her family members and she was one of several reasons why I swapped from being an opponent to supporter of capital punishment. I will get the information about her from Wikipedia before giving my thoughts. 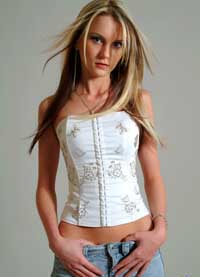 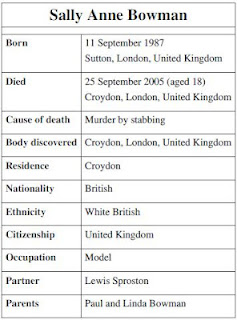 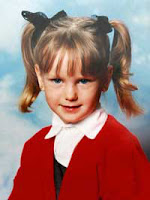 Life and career:
Sally Anne attended the BRIT School for Performing Arts and Technology in Croydon. She had dreams of one day appearing on the cover of Vogue magazine and also being the next Kate Moss. In January 2005, she joined Pulse Model Management, a local talent agency. Sally took part in the Swatch Alternative Fashion Week in April of the same year and described her experience there. "I was so nervous all week particularly when all the models were lined up and the designers chose who they wanted to model their clothes - luckily I was picked by loads of designers which gave me more confidence."

Murder:
In 2005 Bowman was stabbed in the neck and stomach, and then raped as she lay dead or dying. Her handbag, cardigan, bra, thong and mobile phone were stolen. Mark Dixie was accused and charged with the assault and murder of Bowman. At the Old Bailey on 22 February 2008, Dixie was found guilty of Bowman's murder by a jury of 12 people, after only two days of deliberation. The jury sat for three hours and Dixie was found guilty by a unanimous verdict. He was sentenced to life imprisonment with a recommended minimum of 34 years, by which time he will be 70 years old. This is among the longest minimum terms ever imposed upon a single murderer. It was then revealed that Dixie was already a convicted serial sex offender.

Following Dixie's conviction, Detective Superintendent Stuart Cundy, who had led the Bowman investigation, said: "It is my opinion that a national DNA register—with all its appropriate safeguards—could have identified Sally Anne's murderer within 24 hours. Instead it took nearly nine months before Mark Dixie was identified, and almost two-and-a-half years for justice to be done."

The calls for a such a register were, however, turned down by ministers and other politicians who claimed that it would raise practical as well as civil liberties issues.
Police had initially treated Sally Anne Bowman's boyfriend Lewis Sproston as a suspect; he was the last person known to have seen her alive and admitted that they had argued just before she left. He was subsequently arrested but DNA evidence eliminated him as a suspect within hours.

A documentary about the murder was broadcast on BBC1 at 10.35pm on 8 April 2008. Another TV documentary, as part of ITV's Real Crime series documented Bowman's killing, with interviews, the history of the case and reconstructions included. It was shown on 29 June 2009. 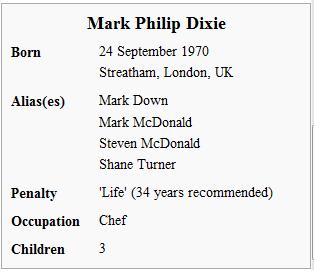 Mark Dixie:
Mark Philip Dixie (born 24 September 1970) was born in Streatham. When he was 18 months old, his parents separated. When he was 8, his mother remarried; she had two sons by her new husband. Dixie took his stepfather's surname, McDonald.

Dixie's criminal record begins in 1986. Between then and 1990, he was found guilty of robbery, burglary, assaulting a police officer, indecent assault, indecent exposure and assault occasioning actual bodily harm.

Dixie lived in Australia from January 1993 until he was deported back to the UK in April 1999 after being fined for indecent exposure. He lived in London until moving to Spain in 2002. He moved back to England in 2003.

Dixie later started work as a chef at the Ye Old Six Bells in Horley, Surrey. He was arrested on 10 June 2006 in nearby Crawley, West Sussex, after being involved in a fight while watching an England vs Trinidad and Tobago World Cup football match. His DNA was taken and matched with that of Bowman's killer.

Dixie denied the murder. As part of his defence he claimed he had spent the night drinking and taking drugs, and had gone out to buy more cocaine. He claimed to have come across the body of Bowman, murdered, he said, by a third party, and had sex with her after she was killed.

Dixie's DNA matches that left at a sexual assault in 2001, where it is believed he masturbated in front of a woman in a telephone booth.

In October 2006, Dixie's DNA was sent to Western Australia to be tested against that of the DNA evidence in the Claremont serial killer case between 1996 and 1997, as it is believed he was in the area at the time of the killings, and may have committed them. At his trial for the murder of Bowman, an unnamed Thai woman gave evidence that Dixie had stabbed and raped her in Australia in June 1998 in Subiaco, Western Australia whilst Dixie was burgling her house; Dixie has yet to be formally charged with this attack, though a DNA sample from the woman's underwear has been matched to him. 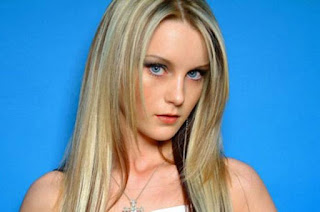 Memorial:
On 11 September 2008, a memorial was held to mark what would have been Sally Anne's 21st birthday. Balloons were released in Central Croydon outside Primark along North End.

MY THOUGHTS:
It is such a tragedy; Sally Anne Bowman could have become Miss England because she is such a drop dead gorgeous. After reading that Mark Dixie was only given a life sentence for about 34 years, I began to walk in the shoes of her family members, it led me to change from being an opponent to a supporter of capital punishment. Her murder taught me to feel for the grieving families of murdered victims and it also led me to start this blog, ‘Victims' Families For The Death Penalty’, as I want to consistently remind people every week of murdered victims and also their grieving loved ones.
As mentioned in earlier posts, I do not agree that life imprisonment is justice at all. Mark Dixie will most probably live till the age of 70 while Sally Bowman lived until the age of 18. I even said to myself, “I wished this murder should have taken place in a country with the death penalty and there will be true justice. The DNA has helped to catch many guilty criminals.”
Sadly, I am concerned that the European Union might create more trouble for the victims and their families. For example, I was furious that they could put so much effort condemning the stoning of Sakineh Mohammadi Ashtiani but not a single empathy or sympathy for a victim like Sally Bowman. The faster, the EU collapse, the better.
In loving memory of her, do hear the quotes from her mother, Linda Bowman. We will never forget you, may you R.I.P.
Posted by SAINT MICHAEL 2012 at 5:30 AM