We, the comrades of Unit 1012, are truly well aware that once the death penalty is abolished, the ACLU Demons will want to end LWOP.

We, the comrades of Unit 1012: The VFFDP, DO NOT TRUST them at all and we know that they are nothing but liars who value the lives of murderers and evildoers, with the plan on putting innocent people’s lives at risk of getting murdered. These Anti-Death Penalty Activists are all the ACLU Demons.

Here is a great example of a Cop Killer who had his sentence reduced: 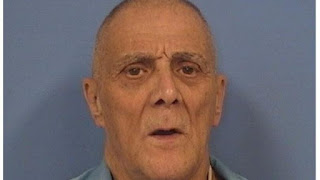 WINNEBAGO COUNTY (WIFR) -- A convicted cop killer has been released from prison.

Ted Bacino was convicted of shooting and killing Winnebago County Detective Michael Mayborne in 1974. Bacino has spent the last 40 years in prison, which based on the sentencing guidelines in place in the 1970's, is a full sentence.

According to Winnebago County State's Attorney Joe Bruscato's office, Bacino was being pursued by Detective Mayborne after he robbed a bank. Bacino then pulled out a gun and shot the Sheriff's Detective twice, before shooting Mayborne again in the head, killing the detective instantly. Bacino was then sentenced to 75 to 100 years in prison.

The State's Attorney's Office says Bacino was sentenced back when Illinois had indeterminate prison sentences. Under the law then, judges would sentence someone to a range of prison sentences, and the law would allow for parole hearings after part of the sentence was served. Bacino had been up for and denied parole several times. The Winnebago County State's Attorney and Detective Mayborne’s family protested his release from prison every time. Bacino served 40 years in prison, which is considered his full term.

Bacino was able to be released in March of 2015. The State's Attorney's Office says they and the Mayborne family were recently made aware of Bacino's release. According to the Illinois Department of Corrections, Bacino now resides in Florida. As part of his parole, Bacino has to wear an electronic monitoring device, he can't have any contact with the Mayborne family, and he has to attend anger management contact.
INTERNET SOURCE: http://www.wifr.com/content/news/Convicted-cop-killer-Ted-Bacino-released-from-prison-381818271.html

By Kevin Haas
Staff writer
ROCKFORD - Convicted cop killer Ted Bacino has been released from prison after spending more than 40 years behind bars.

The 80-year-old parolee now lives in Florida, Winnebago County States Attorney Joe Bruscato said today. As a condition of his parole, Bacino must wear an electronic monitoring device, attend anger management counseling, make regular check-ins with his parole officer and avoid contact with the family of the man he killed.

Bacino, then 38, was trying to escape authorities after a bank robbery on March 15, 1974, when shot and killed Winnebago County Sheriff's Detective Michael Mayborne at close range. Mayborne fired back before he died, lodging a bullet below Bacino's rib cage. Mayborne, a father of two, was 28.

"The only thing you can do is say your prayers that he chooses to make a difference with the second chance he's received," said Jennifer Mayborne, Michael's daughter. "And pray for the family that has to take care of him, and that they can help him make good decisions for his future and what's left of it."

Bacino has been eligible to be released since March 2015, but initially would not sign a parole agreement. Bruscato said that Bacino has now complied with the Illinois Department of Corrections agreement and was released from Taylorville Correctional Center.

For years the Mayborne family fought to keep Bacino behind bars as he tried about 30 times to receive parole.

Bacino was sentenced to 75 to 100 years in prison. But that was before Illinois enacted truth-in-sentencing laws in 1998, which require people convicted of first-degree murder to serve 100 percent of their sentences.

The laws applied to Bacino allowed for periodic chances at early parole. The outdated laws required him to serve only 50 years, and he earned nearly 10 years off his sentence for good behavior, another remnant of antiquated sentencing laws. He is now considered to have served his full sentence.

"As state's attorney I understand under the law he has completed his sentence and I respect that," Bruscato said. "But as a citizen and a supporter of the family, I think it's difficult to accept that his sentence is complete.

"Deputy Mayborne is not forgotten."

Jennifer Mayborne, the youngest of Michael and Terry Mayborne's two daughters, was 2 when her father was killed. She said the family has kept his memory alive by talking with his friends and colleagues, including those who served with Michael in the Navy.

"He comes to life through stories of other people that are still around and remember him," she said.

They learned their father was more than the man who died protecting his community. He was a fun-loving and caring family man.

"We reflect on all of those things that made him the man he was, not just the absolute ultimate end that people think defined us," Jennifer Mayborne said. "We learned to define him a different way.

Terry Mayborne, Michael's widow, also lives in Florida not far from where Bacino will stay, Jennifer said. But she says there is no concern the two will cross paths.

"If one day we do walk across him as a free man, you just keep walking," Jennifer said.
INTERNET SOURCE: http://www.rrstar.com/news/20160603/convicted-winnebago-county-cop-killer-ted-bacino-released-to-florida