Apart from blogging about victims’ families who want to see their loved ones’ killers but to death, also I want to blog about victims’ rights too. I will blog about this information from Wikipedia before giving my comments and condolences about it. 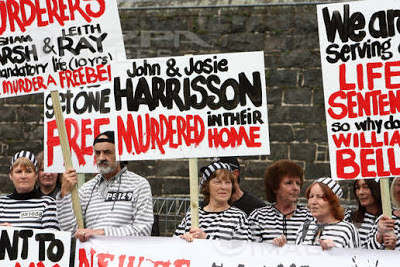 The Crime Victims' Rights Movement in the United States is founded on the idea that, during the late modern period (1800-1970), the American justice system strayed too far from its victim-centric origins. Since the 1970s, the movement has worked to give victims a more meaningful role in criminal proceedings, aiming at the inclusion of "the individual victim as a legally recognized participant with rights, interests, and voice."

During the colonial and revolutionary periods, the United States criminal justice system was "victim-centric," in that crimes were often investigated and prosecuted by individual victims. In the 19th and early 20th centuries, however, the focus shifted so that crime was seen primarily as a "social harm." The criminal justice system came to be seen as a tool for remedying this social harm, rather than an avenue for redress of personal harm, and the role of the victim in criminal proceedings was drastically reduced.

The modern Crime Victims' Rights Movement began in the 1970s. It began, in part, as a response to the 1973 U.S. Supreme Court Decision in Linda R.S. v. Richard D. (410 U.S. 614). In Linda R.S., the Court ruled that the complainant did not have the legal standing to keep the prosecutors' office from discriminately applying a statute criminalizing non-payment of child support. In dicta, the court articulated the then-prevailing view that a crime victim cannot compel a criminal prosecution because "a private citizen lacks a judicially cognizable interest in the prosecution or non-prosecution of another." This ruling served as a high-water mark in the shift away from the victim-centric approach to criminal justice, making it clear that victims in the 1970s had "no formal legal status beyond that of a witness or piece of evidence."

If the Linda R.S. Ruling was a clear representation of the problem of victim exclusion, it also hinted at a solution to the problem. The Court stated that Congress could "enact statutes creating victims' rights, the invasion of which creates standing, even though no injury would exist without the statute." With this statement, the Court provided a legal foundation for victims' rights legislation.

Along with these legal developments, there was a concurrent growth in social consciousness about victims' rights. This was due, in part, to the fact that concern for the fair treatment of victims provided a nexus between disparate, but powerful, social movements. The Law and Order Movement, the Civil Rights Movement, and the Feminist Movement all challenged the criminal justice system to think more carefully about the role of the victim in criminal proceedings. Supporters of these causes helped form the grassroots foundation of the modern Victims' Rights Movement, providing educational resources and legal assistance, and establishing the country's first hotlines and shelters for victims of crime.

In 1982, President Ronald Reagan's Task Force on Victims of Crime released its Final Report. The report reiterated the concerns of victims' rights advocates, claiming that "the innocent victims of crime have been overlooked, their pleas for justice have gone unheeded, and their wounds - personal, emotional, financial - have gone unattended." The Report contained 68 recommendations for service providers and government officials, many of which are mandated through victims' rights legislation today. The report included a recommendation for a victims' rights amendment to the U.S. Constitution, a goal supported by victims' rights organizations today.

Since 1982, thirty-three states have amended their constitutions to address victims' rights, and all states have passed victims' rights legislation. That same year, Congress passed the first piece of federal crime victims' rights legislation, the Victim and Witness Protection Act. In 1984, the Victims of Crime Act and the Violence Against Women Act were passed. In 2004, the landmark Crime Victims' Rights Act was passed, granting crime victims eight specific rights, and providing standing for individual victims to assert those rights in court.
Victims of Crime Act (VOCA)
VOCA established the Crime Victims Fund, which awards grants to crime victim compensation programs, victim notification systems, and victim assistance programs. The Fund is financed by offender fees.

The Crime Victims' Rights Act was named for Scott Campbell, Stephanie Roper, Wendy Preston, Louarna Gillis, and Nila Lynn, murder victims whose families were denied some or all of the rights granted by the Act in the course of their cases.

Criticisms of the Victim-Inclusion Approach

There are three major criticisms of the Victims' Rights Movement, and the accompanying victim-inclusion approach to criminal justice. First, some claim that proposed incorporation of victims' rights will directly undermine defendant's rights. Second, some view victims' rights as impinging on prosecutorial discretion. Finally, some argue that victim participation will inappropriately focus criminal proceedings on vengeance and personal emotion.

Proponents of victims' rights respond by noting that victims' rights of privacy, protection and participation are civil rights that ensure that individual harm is among the harms recognized by the system, and that such rights afford a voice in the process, not a veto of enforcement discretion. Proponents also cite the criminal courts' well-established capacity to afford rights to participants other than the defendants (such as the media), suggesting that accommodation of victims' interests is both possible and desirable. 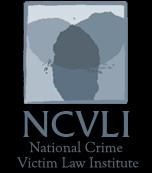 National Alliance of Victims' Rights Attorneys (NAVRA)
NAVRA is a membership alliance of attorneys and advocates dedicated to the promotion of crime victims' rights. It is a project of the National Crime Victim Law Institute. Membership in NAVRA provides access to expert services for crime victims, including a searchable database of case summaries, amicus briefs, and sample pleadings, as well as a directory of victims' rights professionals. 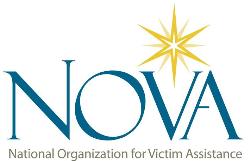 National Organization for Victim Assistance (NOVA)
NOVA is a private non-profit organization dedicated to promoting rights and services for victims of crime. Founded in 1975, NOVA is the oldest national victims rights organization. The organization is focused both on national advocacy and on providing direct services to victims.

National Center for Victims of Crime (NCVC)
NCVC is a nonprofit organization based in Washington, D.C. that advocates for victims' rights.

Outside the United States, victims' rights have been acknowledged as a basic human right. In 1985, the U.N. adopted the Declaration of Basic Principles of Justice for Victims of Crime and Abuse of Power, which outlines international best practices for treatment of crime victims. The report recognizes an offender's obligation to make fair restitution to his or her victim, acknowledges that victims are entitled to fair treatment and access to the mechanisms of justice, and generally draws attention to the need for victims' rights in the criminal justice process. Other United Nations provisions that touch on victims' rights include (1) The International Covenant on Civil and Political Rights (ICCPR); (2) the Convention on the Elimination of Discrimination of Women (CEDAW); and (3) the Convention on the Rights of the Child (CRC). The ICCPR has been ratified by 67 nations, including the United States, Canada, Russia, and France. It includes the following provisions related to victims' rights:

• Rights to be protected from harm, which impose obligations on governments to have effective criminal justice
systems (Article 6.1, Article 7, and Article 17)
• Rights to be recognized by and treated equally before the law (Articles 2, 3, 16, and 26)
• A right of non-discrimination (Article 2)
• Rights to a remedy and to access to justice (Articles 2 and 14)
• Due process rights (Articles 9, 10, 14, and 15)

In 2008, Human Rights Watch published an analysis comparing United States victims' rights laws to international Human Rights Standards. This report, titled "Mixed Results: U.S. Policy and International Standards on the Rights and Interests of Crime," found that "while U.S. Jurisdictions, both federal and state, have made significant progress in recent decades, much more can be done to ensure that victims' rights and legitimate interests are upheld." The report states that the U.S. should use the UN's Basic Principles as a guide to inform their laws and policies. In addition, it recommends that the U.S. adopt policies that: (1) Remove arbitrary limits on the definition of "victim" in state and federal laws; (2) Expand access to victim services and compensation; and (3) "Maintain and enforce standards for the collection and preservation of evidence, particularly rape kit evidence." The report also recommends U.S. ratification of the CEDAW and CRC.

COMMENTS & CONDOLENCES:
To all those victims’ families who have lost their loved ones through homicide. I pray and I hope the laws in your country have victim’s rights too. I pray that the government do not give too much prisoner rights. I also suggest that the media should play a huge part in showing the rights of the victims, rather than making those murderers on death row look like gentle lambs.
As one of my beloved judges, Lord Chief Justice Rayner Goddard will strongly agree to Victims’ Rights as he once said in a speech in the House of Lords on 10 July 1956:

“My sentiments are more in favour of the victim than they are of the murderer. There is a tendency nowadays when any matter of criminal law is discussed to think far more of the criminal than his victim.”