Let us not forget Herman Curry and Alexander Kamara Jr. who were both murdered on July 8, 2012.
Herman Curry
Age 47, departed this life on July 8, 2012; husband of Nadine Curry; father of Shimona, Bevonn, Chante, Akaycia, Omar and Malik; son of Enid Christie; brother of Anthony Watson; also survived by 2 grandchildren, Fabian and Joshua.

Mr. Curry worked as a para professional instructor of students with autism for the Delaware Autism Program. He also worked with adults with disabilities at Keystone Autism Services, DE. Herman was a member of the Waddah Soccer Club. He also coached the CCOD youth basketball and soccer teams.

www.congofuneralhome.com
Published in The News Journal from July 21 to July 23, 2012 - See more at: http://www.legacy.com/obituaries/delawareonline/obituary.aspx?pid=158663716#sthash.DXFcAf9n.dpuf

A chaotic scene erupted at a soccer tournament when two men with guns approached the crowd and one fired several shots at Herman Curry, the tourney's founder, police said. Curry's family told The News Journal that he was a potential witness for the state in its murder case against one of the suspects, Otis Phillips.

Spectators then opened fire on the gunmen, inciting a spray of bullets that left nearly 50 shell casings strewn around the field and parking lot. Curry died, along with Alexander Kamara, who was waiting to play his match, and suspect Sheldon Ogle, who drove the getaway car. Suspect Jeffery Phillips was struck in the leg, and a 33-year-old Baltimore man was hit in the shoulder. 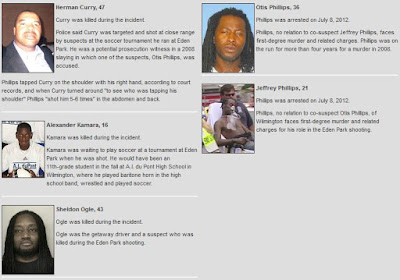 The unidentified man was wounded during the incident.

The man, who was from Baltimore, was wounded during the shooting.

WILMINGTON – A Superior Court jury on Thursday voted unanimously in favor of the death penalty for Otis Phillips after two and a half hours of deliberation.

Phillips, 38, along with co-defendant Jeffrey Phillips, was convicted late last month of the first-degree murder of Herman Curry and the manslaughter of 16-year-old Alexander Kamara Jr. in a daylight shootout at Eden Park during a soccer tournament.

Curry, 47, had been the organizer of the tournament and Kamara was a player on one of the teams.

The panel unanimously ruled that prosecutors had proven two statutory aggravators in the case against Otis Phillips, qualifying him for the death penalty. The jury ruled two or more people were killed as a result of Otis Phillips' actions and the murder was premeditated and the result of substantial planning.

Oddly, the jury did not find that a third aggravator – that the murder was committed for the purpose of preventing a witness, Curry, from testifying in a criminal proceeding – as prosecutors argued.

This same jury last month found Otis Phillips was guilty of the second–degree murder of Christopher Palmer in 2008 and prosecutors had argued that on July 8, 2012 Phillips "executed" Curry in order to prevent him from testifying about the Palmer case.

But the jury only needed to unanimously find that there was one statutory aggravator in order to move on to the question of whether the aggravating factors in the case outweighed the mitigating factors and on that question the vote was 12–0.

Otis Phillips, who was dressed in black slacks and a white, untucked button down shirt was wringing his folded hands as he sat at the defense table, before the jury came in. But when Superior Court Judge Calvin L. Scott Jr. read the jury vote, Phillips did not react. He instead stared blankly in the direction of the jury and did not appear to speak with his attorneys before he was lead out of the courtroom.

The jury vote is only a recommendation and it is up to the judge to impose the death penalty. But when there is a clear vote, like this one, judges almost always follow the jury recommendation.

Scott did not immediately set a sentencing date.

He walked away from shootings and robberies, grabbed and fondled women he saw on the dance floor, and lied his way out of jail, Downs said. "And if anyone got in his way, he would be eliminated and that is what happened to Herman Curry," Downs told the jury, asking them to finally hold Otis Phillips responsible.

In this case, Downs said, "the law allows the death penalty and justice demands it."

Phillips' attorney Michael Heyden, meanwhile, described his client as a man who was given few breaks in life. He was one of eight brothers born in one of the poorest countries in the world, Guyana, and was repeatedly abandoned by his parents throughout his childhood.

Phillips was first left at age seven by his parents when they moved to the United States without him. Then after being reunited with them a year and a half later, he was left again at age 14 when his mother died and his father promptly married another woman and moved, leaving Phillips and his brothers in Brooklyn, New York.

And, Heyden said, Phillips was abandoned a third time when his father came back and told his son they were going on a vacation to Guyana. Once there, the father took Phillips' immigration papers and left him and one of his brothers with strangers. According to testimony, Phillips only found out he wasn't going back with his father in a brief phone call from his Dad from the airport.

Heyden told the jury that if they voted for death, they would be engaging in the same revenge and retaliation that prosecutors charged Phillips engaged in at Eden Park. "You are not a gang, you are a jury. You should show mercy," he said, adding imposing the death penalty on Phillips will only bring more tears.

Heyden showed pictures of Phillips with his young daughter and pictures the daughter drew in crayon to her father, professing her love. "If you kill Otis Phillips, you are hurting that young girl," he said.

Downs acknowledged Phillips had a difficult and traumatic childhood, but he said around 2002 Phillips had overcome his upbringing to get married, to have a child, buy a house and to land a solid $20-an-hour union construction job.

But, Downs said, Phillips walked away from all that a few years later, leaving his wife, child and job behind for a thug life with a street gang.

"There was a pattern of violence in his life. Instead of his job, instead of his house, instead of his family, he chose to be the muscle for the Sure Shots," he said, putting up a picture of Phillips as he was being taken into custody after the shooting at Eden Park. "That is Otis Phillips."

"The bad outweighed the good."

The jury, judge and prosecutors will be back in court on Monday for the penalty phase hearing against co-defendant, Jeffrey Phillips, who also faces a possible death sentence for his role in the slayings at Eden Park.

Despite having the same last name, Jeffrey and Otis are not related.